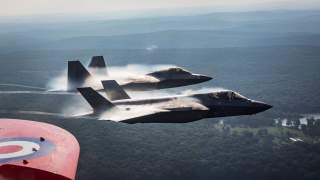 Key Point: The introduction of the iPhone triggered major and ongoing changes in business practices, politics, media, social behavior, standards for law enforcement activities and many other areas of daily life. The F-35 Joint Strike Fighter has the potential to introduce similarly large advancements to the conduct of U.S. and coalition military operations.

The introduction of the iPhone in 2007 did more than merely improve the state of mobile communications or make Apple a pile of money. It transformed the telecommunications industry, opened up entirely new subsectors of the economy, just by producing apps, and changed the way personal and professional business is conducted. The iPhone also unleashed a revolution in social interactions and behaviors of civil society.

It is difficult to underestimate the street power the iPhone put in the hands of individual citizens with its increasingly high quality cameras, able to record every move made by government officials and every sound bite of political leaders. Entire communities of interest have grown up around the iPhone and individual apps. Privacy and the conduct of work are being redefined. If you want to experience true globalization, play any one of the popular online multiplayer games available on your iPhone.

Unbeknownst to most Americans, a similar phenomenon is occurring in the realm of military airpower. The F-35 Joint Strike Fighter (JSF), the world’s first truly international military aircraft, is on the brink of revolutionizing not just air combat but the military organizations deploying it, the coalitions and alliances in which the JSF will operate and the way conflicts will be fought in the future.

There has been much criticism over the years regarding the management of the JSF program. Clearly, decision makers, military planners and even aerospace engineers underestimated the difficulties associated with designing and producing the F-35. Pentagon leadership at the time did neither themselves nor the JSF program any favors with the decision to build a single basic platform to fulfill the different requirements of three U.S. military services and eight foreign nations.

Nevertheless, the F-35 program has weathered virtually all of its technical, testing and financial challenges. The U.S. Marine Corps has gone operational with the Short Takeoff/Vertical Landing variant, the F-35B. The United Kingdom Royal Air Force will have fully operational F-35A squadrons before the U.S Air Force does. The Royal Australian Air Force is building an all fifth-generation fleet of military aircraft around the capabilities offered by the F-35.

Viewing the F-35 as just a fighter, albeit stealthy, is as much a mistake as seeing the iPhone and its successors and competitors as just mobile telephones. The sensors, avionics and other electronic systems on the relatively few F-35s in operation are already radically altering the way militaries around the world, including our own, think about air operations.

It is difficult to overstate the impact of the F-35 on multinational air operations. As NATO learned with the proliferation of F-16s among European allies, operating the same aircraft can significantly enhance interoperability both in the air and on the ground. The introduction of the F-35 into the air fleets of the U.K., Italy, Norway, the Netherlands, Denmark, Turkey and, hopefully, Canada is creating the potential for remarkable synergies not only in training and combat operations but also in logistics and sustainment. The same is true for other friends and allies currently acquiring the F-35: Israel, Australia and Japan. A recent article in BreakingDefense by the eminent air power analyst, Robbin Laird, quotes a senior U.S. Air Force officer on the value of operating in Europe with the other nations that are also acquiring the JSF:

“We are not flying alone; but joined at the hip. We will be flying exactly in the area of interest for which the plane was designed and can fly together, maintain together, and operate together leveraging the air and sea base for which the F-35B will fly from as well. It is a unique and strategic opportunity for the USAF and for the nations.”

The role of the F-35 as an information node, collecting and communicating data from multiple systems, offers the potential for an entirely new level of near real-time intelligence sharing. Part of the remarkable effectiveness of the F-35 is due to its ability to exploit computerized information on threat systems. These Mission Data Files allow for extremely rapid identification and response to a wide variety of hostile sensors, weapons and platforms. In the hands of a dozen or more countries around the world, the F-35 holds forth the prospect for radically changing intelligence sharing by enabling massive collection and dissemination of threat information to U.S. forces and those of friends and allies.

War and the conduct of military operations are about much more than just technologies and weapons. They involve organization, culture and values. The introduction of the iPhone triggered major and ongoing changes in business practices, politics, media, social behavior, standards for law enforcement activities and many other areas of daily life. The F-35 Joint Strike Fighter has the potential to introduce similarly large advancements to the conduct of U.S. and coalition military operations. We are already seeing some of these modifications in aircraft employment, combat tactics and alliance interoperability. More will come.

F-35 vs. A-10: Which Plane Should Defend America's Soldiers?