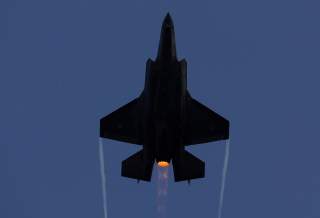 This first appeared in ASPI’s The Strategist here back in 2017.

Perhaps apocryphal, the story goes that a senior US Air Force officer on the Joint Strike Fighter Program found himself sitting next to a Chinese general. ‘I like your aeroplane,’ the General said. That’s nice,’ said the American, How many would you like?’ The general smiled and raised a single finger. ‘Just one,’ he said.

While China has long been concerned enough about the JSF’s capabilities to have plundered its plans in cyber files in the hope of reverse engineering it, critics in Australia have created the broad impression that the aircraft, now officially named the F-35 Lightning ll, is a ‘dog’. That criticism was loud enough to trigger a parliamentary inquiry into whether the RAAF should buy the JSF.

The Senate inquiry, concluded that ‘… the F-35A is the only aircraft able to meet Australia’s strategic needs for the foreseeable future, and that sufficient progress is being made in the test and evaluation program to address performance issues of concern.’ Its report also said that ‘in light of the serious problems that led to a re-baselining of the F-35 program in 2012, and the ongoing issues identified by the US Director of Operational Test and Evaluation, the committee retains a healthy skepticism towards assurances by Defense regarding cost, schedule and capability outcomes of the F-35A.’

That reflected the long held view of the director of ASPI’s defense and strategic program, Dr Andrew Davies, that while the early years of the JSF program were plagued by cost overruns and schedule slippages it had performed much better since action was taken to tighten it up. Costs were now coming down and the production schedule was stabilising.

The committee gave little credence to more extravagant assertions the JSF was outdated and would be outperformed by potential rivals.

It’s often claimed that the RAAF would be better off with the US F-22 Raptor, a bigger, twin-engine cousin of the F-35 produced in the 1990s. In reality, the F-22 is an air superiority fighter very good at clearing the skies of enemy aircraft but not designed to do other tasks as well as the JSF can. It was expensive to buy and operate and the assembly line closed years ago.

The JSF is a multi-purpose aircraft, designed for many roles, from achieving air superiority to sinking enemy warships, attacking targets on the ground and providing close air support for troops. It is, in the words of Group Captain Glen Beck who heads the RAAF’s Air Combat Transition Office, an all rounder—‘a flying batsman/bowler’. The head of the RAAF’s JSF Capability and Sustainment Group, Air Vice Marshal Leigh Gordon, says the Raptor is ‘a wonderful, dated aeroplane which we couldn’t have even if we wanted it.’ The JSF is much more sophisticated with about 8.5 million lines of computer code compared to fewer than 2 million in the F-22.

Donald Trump caused consternation by suggesting that, to wind back Lockheed-Martin’s cost overruns, he’d ask Boeing if it could produce an alternative. But within days, the new Defence Secretary, James Mattis, told a US Senate hearing ‘the JSF is critical for our own air superiority’ because of the jet’s electronics which magnifies its capability. Mr Trump just wanted to bring the price down to get ‘best bang for the buck’, General Mattis said. In truth, the decisions needed to reduce the price were made years ago.

Various prices have been claimed for the RAAF’s JSFs, ranging up to $300 million each. The head of the Pentagon’s F-35 Joint Project Office, US Air Force Lieutenant General Chris Bogdan, said in Australia this week that he was confident the price of each jet—we have 72 on order—would come down to $80 million each. That’s close to the price tag of a much-less sophisticated fourth-generation fighter.

In 2010, alarms rang in the US bureaucracy because the project was running well over budget and two years late. It was ‘rebaselined’ and largely brought under control.

The project is staggeringly complex and it is still having issues but the Americans and the RAAF are confident the fighter will work very well. One recent problem was that the designers had to abandon the guided weapon intended to hit moving ground targets because it was a form of cluster munition which the US no longer uses. A replacement is being worked on.

As well, there’s a delay in producing a suitable anti-ship missile for Australia’s needs. One is being worked on by the Norwegians and Australian defense scientists are developing a sensor for it.

Gordon says the problems are being solved as they emerge and he’s confident the RAAF’s JSFs will meet the new schedule, with the first aircraft arriving in December 2018 and three squadrons and a training unit fully operational in 2023.

It was suggested recently that women (or slighter men) won’t be able to fly the JSF because the helmet was so heavy it would break their necks if they ejected. The RAAF says that’s been resolved by making the helmet lighter, modifying the ejector seat head support panel and slightly slowing the opening of the parachute.

Several countries have increased their JSF orders in recent months after thoroughly examining its capabilities. Israel, which spends defence dollars very carefully, says it’s very pleased with its purchase and it could buy 75 aircraft.

The US Marines say their pilots love the JSF and want them as fast as they can be delivered.

YF-23: The Stealth Super Plane the U.S. Air Force Almost Built Instead of the F-22