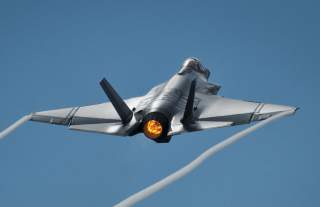 The Trump administration is confirming that a U.S. Air Force (USAF) base in the Florida Panhandle that was devastated by Hurricane Michael will be rebuilt so it can house F-35 fighter jets.

Vice President Mike Pence tweeted on Aug. 6, 2019 that squadrons of F-35 fighter jets will be based at Tyndall Air Force Base (AFB) outside Panama City beginning in 2023.

According to The Associated Press, the Air Force had previously conducted an evaluation showing Tyndall can accommodate three F-35 squadrons.

With 11,000 military and civilian workers, the base suffered catastrophic damage from Hurricane Michael last October. The estimated cost to rebuild the base is $4.7 billion.

Most of the F-22 Raptor fighter jets that were housed at Tyndall AFB before the hurricane were moved to other bases.

As we have previously reported, before the storm, Tyndall AFB was home to the 325th Fighter Wing–comprised of two F-22 squadrons. One was operational and one was training. The base also hosts the 1st Air Force, the 53rd Weapons Evaluation Group, and the Air Force Civil Engineer Center.

The F-22s will be reassigned to units in Alaska, Hawaii and Virginia. Those squadrons will have 24 aircraft instead of 21.

“We have recommended that the best path forward to increase readiness and use money wisely is to consolidate the operational F-22s formerly at Tyndall in Alaska, Hawaii and Virginia, and make the decision now to put the next three squadrons of F-35s beyond those for which we have already made decisions at Tyndall,” said Secretary of the Air Force Heather Wilson last December.