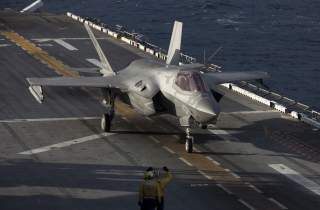 The F-35 Joint Strike Fighters in the operational test fleet at California’s Edwards Air Force Base are suffering from low readiness rates that may threaten the successful completion of the crucial combat-testing phase of the program, as shown in a chart created by the Joint Program Office’s Integrated Test Force and obtained by the Project On Government Oversight (POGO).

The revelation that the F-35 program is struggling to overcome the last hurdle before it can legally move into full-rate production follows numerous recent reports, including by POGO as well as the Government Accountability Office, indicating the most expensive weapon system in history is far from ready to face current or future threats.

The 23 aircraft in the test fleet achieved an abysmal “fully mission capable” rate of 8.7 percent in June 2019 according to the chart, which covers December 2018 through mid-July 2019. A fully mission capable aircraft can perform all of its assigned missions, a particularly important readiness measure for multi-mission programs such as the F-35. The June rate was actually an improvement over the previous month, when the fleet managed a rate of just 4.7 percent. Since the beginning of operational testing in December 2018, the fleet has had an average fully mission capable rate of just 11 percent.

The Pentagon’s operational testing director has stated that the test fleet needs an 80 percentavailability rate to meet the demanding schedule of the program’s test and evaluation master plan.

Aircraft mission capability statuses can be degraded for reasons including a lack of spare parts or a failure in a mission system like the radar or electronic warfare instruments. According to sources within the F-35 program, a frequently failing component is the Distributed Aperture System. This system provides the pilot warnings of incoming missiles and generates the imagery for the $400,000 helmet that the pilot wears. The F-35 can still fly with problems like this, and, using the data links between aircraft, some of the information from a functioning system on another F-35 can fill in a blind spot in a degraded one. But this only works up to a point, and to fully test the program’s capabilities, all systems must function properly.

The operational test fleet’s low readiness rates are surprising, considering the high-profile nature of the fleet’s mission. Under federal law, a major defense acquisition program cannot legally proceed to full-rate production until the director of operational test and evaluation (DOT&E) submits a final report to the secretary of defense and Congress following the conclusion of the testing process. Because of this, the operational testing fleet receives extra support in the form of larger maintenance crews, and is presumably higher on the priority list to receive spare parts.

The operational test fleet readiness chart shows that aircraft being used for operational testing are actually performing worse than the rest of the F-35 fleet, which could achieve only a 27 percent fully mission capable rate, according to the latest available figures.

This comes on the heels of a recent Air Force Times report showing that readiness figures across all of the Air Force’s aircraft programs have steadily decreased over the past eight years. In 2012, all 5,400 aircraft averaged a “mission capable” rate of 77.9 percent. By 2018, that figure had slid to 69.97 percent. A mission capable aircraft can perform at least one of its assigned tasks.

Last September, recognizing the brewing aircraft-readiness crisis, then-Secretary of Defense James Mattis issued a directive ordering the services to achieve an 80 percent mission capable rate by the end of September 2019. The Air Force figures indicate the service is unlikely to meet that goal.

Be that as it may, the F-35 operational test fleet readiness chart POGO obtained clearly shows six months’ worth of data for the aircraft program at the center of all the services’ future plans. It shows fluctuations in the relative rates throughout the reporting period, but the readiness rates during this critical combat-testing process have been consistently bad.

The Pentagon is expected to decide in October whether the F-35 program is ready to move to full-rate production. In light of the disclosure of the testing fleet’s struggles, it is difficult to see how the current testing program can be completed on time.

This could be a revealing moment for Robert Behler, the operational testing director. He could, in order to meet the Pentagon’s arbitrary schedule, call a halt to the tests and give the go-ahead to move to full-rate production without completing the approved testing plan. But such a move would call into question the integrity of the testing process and the purpose of his office. And the troops who must trust their lives to this aircraft would have reason to question its combat-worthiness, while the American people would have all the more reason to doubt that a program they have funded for the past 17-plus years can actually perform as advertised.