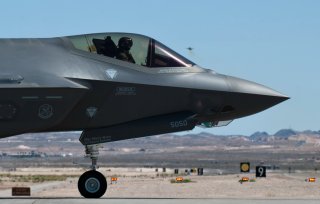 According to an Air Force TV news report, eight new F-35A fighters from the Vermont Air National Guard have been sent to NATO’s eastern flank for readiness and deterrence missions, including security operations and policing

The F-35’s advanced abilities, along with the fact that the U.S. Air Force’s fifth-generation jets greatly outnumber those operated by Russia, may be a large reason why Vladimir Putin has been careful not to actually “confront” NATO over Ukraine. Certainly, Putin’s rhetoric continues to be extremely hostile, threatening and inflammatory, yet thus far the Russian military has held itself in check when it comes to attacking NATO.

Due to Russia’s large army and sizeable arsenal of short, medium, and long-range ballistic missiles, the Russian military could pose a significant threat to ground forces operating along NATO’s eastern flank, despite the Russian Army’s questionable performance thus far. However, even considering its struggles and failures in Ukraine, the Russian Army still operates a large amount of firepower, a fact often discussed by the Pentagon. Thus, a U.S.-NATO-Russia ground confrontation would likely prove extremely costly, dangerous, and ill advised, even if NATO forces are likely to prevail.

Establishing air superiority, however, is an entirely different matter it seems. An ability to dominate the air would give NATO an ability to destroy advancing Russian armored units. Russia’s fighter jet force largely consists of fourth-generation fighters and a handful of emerging Su-57 fifth-generation jets. Russian news reports say that Moscow plans to acquire seventy more Su-57s, but any fifth-generation force size the Russian Air Force could put together would be massively outnumbered by a U.S. fleet of several hundred F-35s. Furthermore, even if the Russian Su-57 were comparable to the F-35, and there is no assurance the two jets offer equivalent capabilities, the sheer number of networked U.S. and NATO F-35s would likely overwhelm Russian air forces.

When it comes to air operations, mass certainly matters. This is even more true for fifth-generation fighters like the F-35, which seeks to leverage its networked capabilities with a secure Multifunction Advanced Data Link (MADL). F-35 stealth fighters operating together in formation can therefore cover a wider envelope, quickly share intelligence and targeting information, and perform attack and surveillance missions simultaneously. A larger number of F-35 Joint Strike Fighters, and F-22 Raptors as well, would be much better positioned to overcome Russian air defenses as part of a rapid effort to establish air superiority.