F-35 vs. the Rest: Which Of These 5 Planes Will Be Canada's New Fighter Jet? 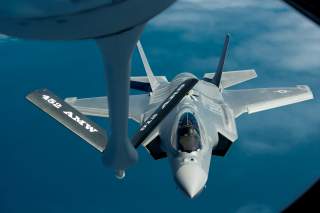 The Canadian government just released a draft tender seeking information from five companies who will compete for the eighty-eight-jet, $26 billion (USD $20 billion) order. The contenders will likely be the Eurofighter Typhoon, France’s Dassault Rafale, Sweden’s Saab Gripen, and for the United States, Boeing’s F/A-18 E/F Super Hornet and Lockheed Martin’s F-35. The actual bidding is supposed to begin in May 2019, with the aircraft entering service in the Royal Canadian Air Force (RCAF) by the mid-2020s.

How to replace Canada’s thirty-five-year-old CF-18s—the Canadian version of the U.S. F/A-18 Hornet—has been a political hot potato juggled between Canada’s political parties, as well as the Trump administration and Canada.

The twists and turns in the saga include Canada nixing a proposed buy of Super Hornet last year after the Trump administration imposed tariffs on Canadian aircraft maker Bombardier. Ottawa now plans to buy twenty-five used F/A-18 Hornets from Australia as a stopgap until a brand-new fighter jet is selected. At the same time, Canada ponied up another C$54 million (US$41 million) to remain a member of the international F-35 consortium, to which Canada has contributed a half-billion dollars over the past twenty years.

As if that wasn’t enough, the current Liberal party government just changed the bidding requirements, put out by the previous Conservative party government and thought to favor the F-35, in favor of new requirements that will make it easier for European companies to win the fighter contract.

The issue “has become extremely politicized as the current government tries to find ways to meet its election campaign promises of holding an open and transparent competition but not buying the F-35,” David Stone, a defense expert at the Canadian Forces College in Toronto, told the National Interest. “They now realize that they cannot actually exclude the F-35 if they are to hold an open and transparent competition.”

Stone sees the Canadian government having to grapple with two issues. One involves offsets, or how much the winning aircraft manufacturer will invest in Canada. “This will be complicated on the government side because the MOU [memorandum of understanding] for belonging to the F-35 Consortium indicates nations agree that there will be no offsets. Should the government choose the F-35, it must be able to have a narrative that indicates it is getting more benefit from the opportunity to be part of the supply chain for all F-35s, versus getting benefits for just 88 [Canadian] planes. Should government choose a different aircraft, they will need to have a narrative to deal with the loss of business opportunity to all of those industries now part of the F-35 development supply chain.”

Then there is the fact that 2019 is an election year that will inevitably make the fighter competition a political issue. “It is further complicated for Canadians because former Canadian Forces officers are indicating their support or not for the F-35 on issues like a single engine, interoperability, etc.,” Stone says. “For example, the test pilots for the F-35 and the Super Hornet are both past F-18 Squadron Commanders in the RCAF.”

Missing from all the politicking and economics is a discussion over which aircraft is actually better for Canada, which preferred the original CF-18 in part because it had two engines rather than single-engine planes such as the F-15, F-16 and French Mirage F-1 (the F-35 also has one engine). One consideration is that the RCAF has to patrol and protect a vast swathe of Arctic territory, a region rich in mineral resources and shipping routes that are coveted by multiple nations, including Russia and the United States.