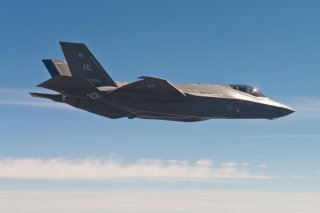 This past January, the Polish government took the bold step to acquire thirty-two F-35A Joint Strike Fighters (JSF). Poland is becoming a major player in NATO. It is working to modernize its air, sea and land forces. It is also forging closer relations with the United States, hosting U.S. forces, allowing the prepositioning of military equipment, and working to improve interoperability. By making the decision to buy the F-35, Poland will leap ahead of a number of its European allies, most notably France and Germany, and enter the elite group of countries operating fifth- generation aircraft.

The F-35 will not only be America’s premier fifth generation fighter, but the world’s. From its inception, the JSF was going to be an international fighter. The F-35 Consortium, consisting of the United Kingdom, Italy, the Netherlands, Canada, Australia, Norway, Denmark, and until recently Turkey, contributed more than $4 billion towards the program’s development costs. The aerospace industries in each of these countries also contributed critical technologies. Current estimates for international purchases are between 600 and 700 JSFs.

If all the NATO members currently planning to acquire the JSF fulfill their commitments, the F-35 will constitute NATO’s single biggest fighter fleet, ahead of the Franco-German-British Eurofighter. This will provide a major boost to air power interoperability for the Alliance.

The move from the current fourth-generation platforms to fifth-generation is both inevitable and urgent. There is a general consensus that fourth-generation aircraft have decreasing survivability in the face of advanced, integrated air-defense networks. Efforts to sustain the ability of older aircraft to penetrate increasing lethal defenses will require larger force packages and the extensive use of scarce support assets, such as airborne jammers. Given that NATO air forces will also be fighting outnumbered, with their infrastructure under continuous attack from long-range-fire systems, this is a losing proposition.

The F-35 will inevitably become the centerpiece of NATO’s air capability. Fifth-generation aircraft with low-observable features, commonly referred to as “stealthiness,” and an array of advanced sensors are able not only to counter advanced air defenses, thereby restoring the West’s erstwhile advantage in the air, but improve the performance and survivability of fourth-generation aerial platforms. Employing its sophisticated suite of sensors, the JSF can pass high-quality, near-real-time targeting information to fourth-generation platforms operating at a distance from high-threat air defenses. In addition, with its revolutionary array of sensors and computers, the F-35 can serve as both a penetrating ISR and stand-in electronic warfare platform.

The ability of the JSF to operate as a highly survivable and agile sensor platform is of nearly incalculable advantage to all networked land, air, and sea forces. The F-35 will enhance NATO’s air and missile defenses and enable new, long-range fires. Operating from within an adversary’s air-defense network, these aircraft will provide early threat detection and tracking, improving the engagement potential of defensive systems. In addition, nascent investments in long-range fires and intermediate-range missiles require a forward-deployed targeting capability that, at present, only fifth-generation platforms can provide. The U.S. Army has demonstrated the ability of the F-35 to serve as a forward-deployed targeting node for its long-range precision-fires program.

Thus, it is difficult to overestimate the importance of Poland’s decision. As a front line state, Poland must be able to field a military capability that dissuades Russia from considering any resort to military coercion or force. The Defense Security Cooperation Agency argued that the case for selling F-35s to Poland was compelling: “This proposed sale of F-35s will provide Poland with a credible defense capability to deter aggression in the region and ensure interoperability with U.S. forces. The proposed sale will augment Poland’s operational aircraft inventory and enhance its air-to-air and air-to-ground self-defense capability.”

According to some observers, Poland’s decision to acquire the F-35 means that for the first time since the advent of airpower, that country will have a better air force than Germany or France. Polish Prime Minister Mateusz Morawiecki declared: “The F-35 is a sky-high armament that is to serve the Polish armed forces and NATO forces to protect in particular the eastern flank. We are joining this elite group of countries that will be able to use the most modern equipment and the most modern technologies.”

Operating fifth-generation aircraft also improves the ability of NATO allies to integrate their operations and forces with those that the U.S. deploys to Europe. Upon the Polish defense minister’s announcement of the decision to acquire the F-35, U.S. Ambassador to Poland Georgette Mosbacher tweeted: “I’m proud that the U.S. is sharing the latest defense technology with key allies. F-35 fighters will enhance Poland’s interoperability with U.S. forces and our partnership for common security."

As a member of the F-35 club, Warsaw will establish a special relationship with other F-35 operators. In January, Poland joined the F-35 User’s Group to share information, lessons learned and best practices as aircraft are acquired and fielded.

Today, there is only one fifth-generation fighter on the market, the F-35. Efforts by some NATO members to develop their own fifth or even sixth-generation fighter will not come to fruition until the 2040s, at the earliest. By not acquiring the JSF, these countries not only increase their risk in the event of aggression against the Alliance but ensure that they will lag behind countries that have chosen to acquire the F-35 in the development of the appropriate tactics, techniques and procedures for operating advanced, stealthy platforms. It is not clear how or even if an air force can successfully make the leap from fourth to sixth-generation capabilities. The UK has taken a more sensible, but still challenging, approach: first acquiring the F-35 and then beginning development of a sixth-generation air platform.

If NATO is to successfully deter the growing threat from Russia, which today is deploying its own fifth-generation fighter, the only option is to invest in the F-35. By doing so, Poland has taken an important step towards enhancing its own security and that of the Alliance as a whole.