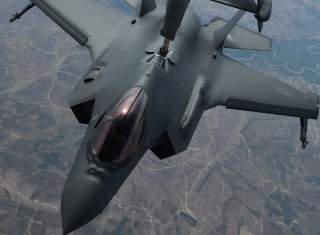 At least six F-35s from the 388th and 419th Fighter Wings on April 12, 2019 traveled from their home station at Hill Air Force Base in Utah to Al Dhafra air base in the United Arab Emirates to participate in coalition air operations.

"We are adding a cutting-edge weapons system to our arsenal that significantly enhances the capability of the coalition," said Lt. Gen. Joseph Guastella, commander of U.S. Air Forces Central Command. "The sensor fusion and survivability this aircraft provides to the joint force will enhance security and stability across the theater and deter aggressors."

Air Force F-35As in April 2017 deployed to Royal Air Force base Lakenheath. USAF F-35As that fall also deployed to the U.S. Indo-Pacific Command area of responsibility. The Middle East deployment is the USAF stealth fighter's first to a war zone.

The F-35s could fill the gap that the Air Force's F-22 Raptors left when in February 2019 they departed the Middle East after five years of continuous operations. Older, non-stealthy F-15C fighters stood in for the radar-evading F-22s as the Pentagon's main air-superiority fighters in the region.

The Air Force once touted the Raptors as a "quarterback" for strike operations in a complex area that includes anti-aircraft threats from the Syrian military, as well as Russian aircraft operating in the region.

Not coincidentally, Air Force leaders have begun describing the F-35 in similar terms. "The F-35A provides our nation air dominance in any threat," said Gen. David Goldfein, chief of staff of the Air Force. "When it comes to having a ‘quarterback’ for the coalition joint force, the inter-operable F-35A is clearly the aircraft for the leadership role."

“The F-35A has sensors everywhere, it has advanced radar, and it is gathering and fusing all this information from the battlespace in real time,” said Lt. Col. Yosef Morris, commander of the 4th Fighter Squadron, which is part of the 388th Wing. “Now it has the ability to take that information and share it with other F-35s or even other fourth-generation aircraft in the same package that can also see the integrated picture.”

With the April 2019 air raid, the U.S. Air Force becomes the third service after the Israeli air force and the U.S. Marine Corps to send the F-35 into combat. The U.K. Royal Air Force soon could become the fourth to deploy F-35s to a war zone.

The Air Force steadily is buying around 50 F-35s annually as it works toward a total inventory of more than 1,700 of the single-engine stealth fighters. But the F-35 still is a work in progress.

Only half of the F-35s were flight-ready during one eight-month period in 2018, according to an April 2019 report from the U.S. Government Accountability Office. A lack of spare parts grounded the fighters around 30 percent of the time.

“In 2017, we reported that [the Defense Department] was experiencing sustainment challenges that were reducing warfighter readiness, including delays of six years in standing up repair capabilities for F-35 parts at its depots and significant spare parts shortages that were preventing the F-35 fleet from flying about 20 percent of the time,” the GAO explained.

“Specifically, the F-35 supply chain does not have enough spare parts available to keep aircraft flying enough of the time necessary to meet warfighter requirements.”

Acting Defense Secretary Patrick Shanahan, a former Boeing executive, famously described the F-35 program as “f*cked up.” His office approved a proposal from one military analytical group for the Air Force to begin buying as many as 144 new F-15EX fighters from Boeing in order to complement the F-35.

The F-15EX is more reliable and cheaper to operate than the F-35 is, Air Force officials claimed. But Air Force chief of staff Goldfein told Defense News that buying F-15EXs would not impact the service's planned acquisition of more than 1,700 F-35s.