The F-35B Is the Future of the U.S. Marine Corps (But Can Old Harrier Jets Keep Flying?) 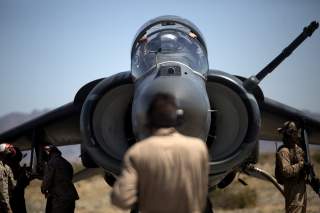 The U.S. Marine Corps needs to upgrade its shrinking force of AV-8B Harrier jump jets in order to keep them viable until the last few jets finally bow out of service in late 2027 or early 2028, according to the Corps' 2019 aviation plan.

The single-engine, Boeing-made Harrier for decades was the only fixed-wing plane that could embark on the U.S. Navy's amphibious assault ships.

"The AV-8B’s lethality and [vertical landing and take-off] capability, combined with the [amphibious group's] proximity to littoral targets, rapid turn-around time and hot reloading of weapons provide unique capability to the deployed MEU," according to the plan.

The militants destroyed six Harriers and damaged two more. To compensate for the loss, the Marines quickly deployed an additional 14 AV-8Bs to Afghanistan.

The Harrier's ubiquitousness began to change when the first detachment of F-35B stealth fighter in late 2018 embarked on USS Wasp for a MEU's deployment to the Middle East, Indian Ocean and western Pacific regions.

As of early 2019 the Marine Corps has procured 135 vertical-landing F-35Bs as well as 23 F-35Cs for aircraft-carrier operations. By 2030 the Corps wants to have 420 F-35s spread across 20 front-line squadrons and two training units.

By then the F-35 would be the Marines' only fighter aircraft, having replaced not only the AV-8, but also the F/A-18 and the EA-6B electronic-warfare plane.

In early 2019 there are 124 AV-8Bs in service with five front-line squadrons and a training unit. The Harriers include 74 jets with radars, 34 "night-attack" models lacking radars and 16 TAV-8B two-seat training jets.

Three Harrier squadrons are scheduled to shutter in 2022, one in 2023, another in 2026 and the last in 2027 or '28. The last squadron to transition to F-35s will be a front-line unit, meaning the Harrier could continue to deploy for combat until the very end, like the EA-6B did when it left service in early 2019.

"With the advent of F-35B deployed with the MEU, Harrier is sharing the MEU [tactical air] mission," the Marine Corps stated in its aviation plan. "As a strike, long-range escort and air-defense as set of the MEU [air-combat element], the AV-8B must continue to develop and address future capability gaps that will allow it to conduct its [mission] until sun-down."

The 124 jump jets are more reliable than they were just a few years ago, the Corps stated. "Sustainment of the AV-8B program is focused on maintaining readiness through the end of service. Airframe fatigue life and flightline inventory are not a current problem, and are not forecast to be through the transition to F-35."

The Marine Corps in its aviation plan lays out an ambitious suite of upgrades for the AV-8B. New software slated for 2020 will allow the Harrier to fire Advanced Precision-Kill Weapon System laser-guided rockets and GPS-guided Joint Stand-Off Weapon glide bombs.

In 2021 the Harriers will get AIM-9X and AIM-120C air-to-air missiles, the LITENING Gen 4 targeting pod and the Link 16 radio datalink. The Corps in 2023 plans to give Harrier pilots a helmet-mounted sight. The jump jets the same year will get a new satellite-communications system.

The Marines expect the old jump jets to remain highly capable in their last few years of service. "The Harrier has been and continues to be the premier [tactical air] platform aboard the MEU."