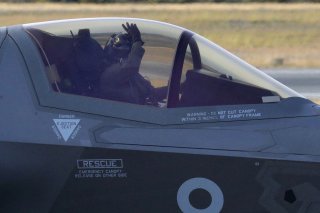 The F-35B is the Short Take-Off, Vertical Landing (STOVL) variant of the fifth-generation Joint Strike Fighter (JSF). As the acronym implies, the B model is distinct from the F-35A and C variants in that it employs a lift fan and thrust-vectoring engine to take off in short distances and land vertically. This unique attribute allows the fighter to operate from short runways, small, simple aircraft carriers and amphibious warfare ships.

The JSF is the world’s only operational fifth-generation fighter in large-scale production. Fifth-generation fighters are distinct from their Cold War-era fourth-generation predecessors (F-15, F-16, F-18, and Russian and Chinese Flankers) primarily in their ability to see enemy fighters and ground threats without being seen. This gives them a substantial increase in combat effectiveness compared with their older cousins. Imagine a battle where one side is blindfolded.

Pairing this generational leap in capability with STOVL flexibility triples the number of allied warships that can operate fifth-generation fighters. These additional platforms could ensure naval dominance over China.

The F-35B is nominally meant to replace the AV-8B Harrier as a close air support fighter, but this doesn't come close to describing its full potential as an air and maritime supremacy platform.

Its stealth, long-range sensors and ability to internally carry Raytheon's AIM-120 AMRAAM air-to-air missile make it the world's most effective air supremacy fighter, after the F-22. The Joint Strike Missile (JSM), and Lockheed's Long Range Anti-Ship Missile (LRASM) provide the F-35B with advanced long-range sea and land strike capabilities. There will soon likely be a JSM variant that will fit into the F-35B's internal bomb bays, thus preserving its stealth.

The AN/APG 81 is the most advanced radar ever fitted onto a fighter aircraft. Its electronically scanned array allows the system to be used for multiple purposes, adding sea search to traditional air search capabilities. Continual software upgrades will only increase that powerful radar's abilities. Finally, by operating at high altitudes, the F-35 sensors can see over the horizon, giving the aircraft a much longer detection range than surface ships. This level of lethality is simply unprecedented in a STOVL package.

America’s ten nuclear powered Nimitz-class carriers operate the catapult and arresting wire variant of the aircraft, the F-35C. These carriers offer unrivaled naval power. In terms of speed, range, survivability, capacity for aircraft, sortie generation, and a host of other criteria, the Nimitz is beyond the challenge of any sea-based threats.

However, nuclear-powered carrier fleets are cost-prohibitive for every non-U.S. navy in the world. The F-35B lowers the barriers to entry into the elite club of (fortunately only allied) nations that can operate fifth-generation fighters off of ships.

The U.S. Navy also operates nine non-nuclear-powered amphibious assault ships that are capable of launching and recovering STOVL fighters. Though they are only half the size of the nuclear-powered carriers, and not dedicated exclusively to air operations, they are a significant force multiplier for U.S. naval aviation. Once the F-35B achieved Initial Operational Capability in 2015, the U.S. Navy found that its fifth-generation-capable carrier fleet essentially doubled, from 10 to 19, by adding this group of smaller warships to the mix.

Furthermore, the F-35B enables up to eleven allied warships to operate fifth-generation fighters. Below is a list of the number of STOVL platforms that each allied nation operates:

* Already have F-35B aircraft delivered or ordered for carrier operations.

** Ships would require some modification for F-35B operations.

Both the Koreans and Australians already operate F-35As, the land-based variant of the Joint Strike Fighter. South Korea is officially reviewing a proposal to purchase F-35Bs.

The barriers of entry to operate F-35B capable warships are so low that Singapore, a nation of only five million people, is also flirting with the idea. Singapore has announced plans to buy roughly a dozen F-35Bs. It has even advertised models of a domestically constructed STOVL carrier, which would essentially be a larger version of their domestically produced Endurance-class amphibious assault ship. The fact that this is even a possibility for a city-state less than half the size of Rhode Island proves how much of a game-changer this flexible fighter is.

Far too much has been made about the implications of the fledgling Chinese aircraft carrier force. The Chinese navy operates a modest pair of carriers with the worst launching method and the worst type of ship engine.

Unlike U.S. big deck carriers, they have no catapults. Without lift fans, their fourth-generation J-15 fighters do not have true short takeoff capability. Therefore, Chinese carrier-based fighters take off by struggling up a ramp in full afterburner. This causes dramatic payload and range penalties, giving it a significantly shorter operational distance than the combat radius for the F-35B.

Unlike the unlimited range of the U.S. nuclear-powered carriers, or the excellent power and efficiency of all modern allied STOVL amphibious assault ship’s gas and diesel propulsion systems, the Chinese carriers employ complex, cumbersome and inefficient oil-fired boilers. This seriously limits the range and makes maintaining and crewing the ships incommensurately expensive.

Persian Gulf energy, African resources, and European and U.S. export markets are essential for Chinese economic prosperity. Without energy from the Persian Gulf, in particular, the Chinese economy would collapse in weeks. In order for it to secure shipping access in wartime, China's navy would need to dominate both the Western Pacific and the Indian Ocean. The difficulties of this task are many, and it would essentially be made impossible by even a fraction of the aforementioned allied amphibious assault ships operating from bases encircling Eurasia.

Five European warships rotating on station in the Indian Ocean, in coordination with naval support bases at Diego Garcia and the Persian Gulf, would be an almost insurmountable challenge to a fledgling Chinese blue water force. Should the Europeans be unwilling or unavailable, one Nimitz-class carrier strike group could also do the job. Meanwhile, four allied East Asian F-35B warships could seal off approaches to the East China Sea, by far China's most important sea line of communication. Finally, two Australian warships could present a serious blocking movement on the Strait of Malacca. All of these decisive naval actions could be accomplished without even entering the disputed South China Sea, or coming within range of China's impressive land-based tactical aircraft.

The modern propulsion systems on the allied STOVL amphibious warships enable longer deployments with less maintenance and overhaul time in between cruises. Chinese carriers, powered by oil-fired boilers, have about 30–40 percent of the endurance of the allied platforms. This naval asymmetry gives the United States and her allies veto power over Chinese economic survival for many years.

Even if only one-fifth of this twenty-ship international STOVL fleet were available at any given time, it would be sufficient to completely tie up China's navy, disrupt its vital shipping lanes from the Pacific Ocean to the Red Sea, and cripple its economy.

The grueling testing and development process of the F-35 left many wondering if incorporating the complex STOVL variant was worth the time and expense. However, the unique advantage it gives—bringing the total number of allied warships capable of operating fifth-generation fighters from ten to thirty, with the potential for more—proves the irreplaceable worth of the F-35B STOVL variant.

Merrick "Mac" Carey is a former senior Capitol Hill aide who is now CEO of the Lexington Institute, a public policy think tank in Arlington, Virginia.