F-35Bs and More: Why U.S. Amphibious Forces Must Dominate the 21st Century 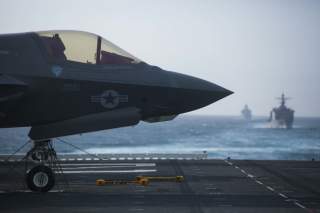 This week, the U.S. Navy and Marine Corps demonstrated yet again why amphibious forces will play a vital role in protecting America’s global interests.

The 13th Marine Expeditionary Unit (MEU), deployed aboard the Essex Amphibious Ready Group (ARG), began operations in and around the Horn of Africa. For the first time, the Marine aviation unit deployed on the Essex amphibious assault ship are operating the F-35B short takeoff/vertical landing variant of the Joint Strike Fighter. The F-35B’s sensors and targeting systems will provide the MEU/ARG with the means to transform operations on land and at sea.

The significance of this event cannot be overestimated. According to Captain Gerald Olin, commodore of the Essex ARG, “It’s really a game-changer for us, and we are really excited to be a part of bringing this new tool to the ARG and learning how to use it. I don’t think we really know exactly… we’re kind of at the leading edge of discovering that.”

The F-35B is just one of a growing number of advanced capabilities the MEU/ARG either is beginning to deploy or will soon possess. The stealthy F-35B, able to operate from large deck amphibious warfare ships and small airfields, provides a particularly useful capability for attacking defended targets and providing targeting information for other platforms and weapons systems. Improved ship-to-shore connectors, including the MV-22 Osprey and the CH-53E heavy-lift helicopter and air cushion-landing craft, will enable Marine Corps units to project power on to land further and faster. In addition, the introduction of the new Amphibious Combat Vehicle, built by BAE Systems, will enhance the effectiveness, speed, and agility of MEU operations ashore.

The ability of the U.S. sea services to deploy more capable amphibious warfare forces is taking place at a time when the threats to vital sea lines of communication (SLOC) are growing both in number and sophistication. Much of U.S. government concerns and public discussions of the threat have focused on events in the Asia-Pacific region, particularly China’s illegal occupation of islands and shoals in the South China Sea and their conversion into military bastions.

However, over the past year, it has become increasingly evident that the threats to critical Middle East SLOCS also are increasing. Iran has repeatedly threatened to close the Strait of Hormuz that is the access route to the Persian Gulf. Iranian-backed Houthi militants in Yemen have conducted a number of attacks with anti-ship cruise missiles on Saudi ships. Earlier this year, the militants fired missiles at two Saudi tankers west of the port of Hodeida. In response, Saudi Arabia halted all oil shipments through the Bab el Mandeb that connects the Red Sea to the Gulf of Aden.

Additionally, Russia is establishing a strong military presence in the Eastern Mediterranean. For example, the Russian Air Force is operating from several airfields in western Syria, and the Russian Navy now has access to the port of Tartus. In anticipation of the possibility of a U.S. military response to the Syrian government's offensive against Idlib, the Russian Navy surged almost two dozen ships to waters off the Syrian coast.

It is relatively easy to envision a future environment in which U.S. forces will be required to counter an array of land-and sea-based threats to the SLOCs that connect Europe to the Middle East and Asia. The MEU/ARG will be particularly useful in countering these threats. Forward deployed MEU/ARGs would be inside an adversary's defensive umbrella. This might seem to be a vulnerable position, but, if properly sized and equipped, these formations could act from the opening of hostilities to blow holes in enemy defenses. With an increasingly lethal mix of aviation, amphibious assault platforms, and ship-based long-range fires, the MEU/ARG not only could conduct defensive operations but also act as a forward base for leading-edge offensive strikes against high-value enemy targets.

The Navy and Marine Corps need to take advantage of their ongoing investments in new platforms and systems by implementing operational concepts and tactics that leverage the unique capabilities of the MEU/ARG. A recent RAND Corporation study focused on the need to shape future amphibious warfare operations in light of the advantages presented by new aviation capabilities:

“Marine Corps aviation is on a path to significantly alter what even ARG/MEUs are capable of doing, and it is important to shape the rest of the force to acknowledge this change. An ARG/MEU with F-35Bs and MV-22s is not just capable of local influence, but can project power and provide defense in ways impossible just a few years ago.”

With the ability of the F-35B to provide long-range targeting information, surface warfare assets can be brought to bear against hostile land and sea forces. The MEU/ARG can be the centerpiece of an operational concept that creates a survivable lethal offensive-defense unit of action. A study by the Center for Strategic and Budgetary Assessments proposes, among other things, enhancing the aviation elements in the ARG/MEU, providing both amphibious ships and landing force with long-range fires and improving air and missile defense capabilities. The Navy should consider creating composite amphibious-strike groups which would be built around the traditional amphibious ready groups but bolstered by surface combatants and unmanned systems.