F-35s Can't Solve This: Why the Air Force Still Has a Pilot Shortage 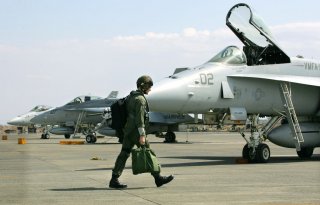 The United States Air Force has a serious pilot problem—the service simply doesn’t have enough of them, and it is unlikely the shortfall will be resolved anytime soon. Air Force leaders have warned that this has been a problem since at least 2017, when the service faced a roughly 2,000-pilot shortfall.

The situation hasn’t improved, and in fact it has gotten worse.

Air Force Chief of Staff Gen. David Goldfein and Vice Chief of Staff Gen. Stephen Wilson told lawmakers on the House Armed Service Subcommittee on Readiness last month that as of the end of fiscal 2018 the service had a shortfall of 10 percent or roughly 2,100 pilots of the 21,000 needed to execute the National Defense Strategy.

The Department of the Air Force’s Fiscal Year 2021 Budget Request for Military Readiness, which was presented to the Subcommittee on Readiness on March 3, stated, “Recruiting, developing, and retaining aviators remains a significant challenge amidst sustained international aircrew shortages—a trend expected to grow more acute over the next decade.”

The report added, “Increasing production of new aviators remains the most significant lever we have to arrest aircrew shortages. We continue to make progress toward growing pilot production to 1,480 aviators per year by FY24.”

One of the key problems faced by the Air Force today is that many military pilots are flying off to better-paying, more flexible jobs with private airlines. That has steadily created a pilot shortage that has been growing over the past few years. At the end of fiscal 2016, the Air Force reported it was 1,555 pilots short, and the gap has grown despite initiatives that have included additional pay.

Another factor has been that pilot training has not been reportedly producing enough new pilots to keep up with the demands of the Air Force.

“The nation is not producing enough pilots,” Goldfein said during a House Armed Services Committee hearing as reported by Military.com. “This is a national-level issue.”

Lawmakers had fired back and suggested that the service should strive to attract more diverse candidates, and move away from “propagating” a “fighter jock” stereotype that has been depicted in movies.

Rep. Anthony Brown (D-Maryland) addressed the shortage of minorities and women flying and said it was “disturbingly low,” and he called upon the Air Force to address its pilot culture.

“We cannot be afraid of this,” Brown said as reported by Military.com. “We have to take it head-on. I implore you to take this on, and to ask Congress for help.”

The sentiments were echoed by Rep. Trent Kelly (R-Miss.), who suggested the service could appeal to younger, more diverse generations—and could do so via advertising campaigns that don’t reinforce the traditional “Top Gun” stereotypes.

“We need to make it where those young ladies and minorities see that TV commercial, and they want to go fly fighters for the United States Air Force,” said Kelly.