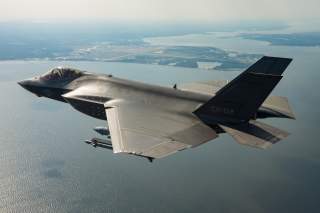 The Trump administration wants the U.S. military to develop new lasers, drones and missiles in order to destroy enemy missiles in the first few minutes after the missiles launch toward their target.

In theory, a missile is most vulnerable when it's slowest. But this "boost-phase" approach to missile defense is risky for defending forces, experts explained. For this reason, an earlier U.S. effort to develop a boost-phase missile defense ended in failure.

Pres. Donald Trump announced his administration's Missile Defense Review on Jan. 17, 2019 in a rambling, political speech at the Pentagon. Trump vowed to build what he characterized as an impenetrable missile shield.

"Our goal is simple," Trump said. "To ensure that we can detect and destroy any missile launched against the United States anywhere, any time and any place."

That includes hitting rockets during the boost phase. "Intercepting offensive missiles in their boost-phase would increase the likelihood of successfully countering missile threats, complicate an aggressor’s attack calculus by reducing its confidence in its missile attack planning," the 2019 review states.

Clinton and Bush spent billions of dollars developing the YAL-1, a 747 carrying a volatile chemical laser. The idea was for the YAL-1 to patrol near an enemy's rocket launch pads and zap the rockets shortly after launch.

But the YAL-1 itself was a big, vulnerable target. Robert Gates, secretary of defense under Obama, canceled the YAL-1 in 2009. "There's nobody in uniform that I know who believes that this is a workable concept," Gates said.

There has been talk in recent years of equipping a drone with laser to perform the same mission. Trump's missile-defense review makes official that concept.

"Developing scalable, efficient and compact high energy laser technology holds the potential to provide a future cost-effective capability to destroy boosting missiles in the early part of the trajectory," according to the review.

"Doing so would leverage earlier technological advances, including for example advances in beam propagation and beam control. [The Defense Department] is developing a Low-Power Laser Demonstrator to evaluate the technologies necessary for mounting a laser on an unmanned airborne platform to track and destroy missiles in their boost-phase."

The review also recommends modifying F-35 stealth fighters for the boost-phase mission, under the assumption that a radar-evading aircraft could fly inside of enemy air defenses in order to patrol in close proximity to rocket launch sites.

The F-35 "can track and destroy adversary cruise missiles today, and, in the future, can be equipped with a new or modified interceptor capable of shooting down adversary ballistic missiles in their boost phase."

"There exists much hype around the concept of boost-phase intercept—shooting down an adversary missile immediately after launch—because of the missile’s relatively slower velocity and lack of deployable countermeasures at that early stage of the flight.

But even a laser-packing drone or missile-killing F-35 wouldn't be able to patrol around the clock. "An attempt at boost-phase intercept would essentially require advance notice of a missile launch in order to position U.S. interceptors within striking distance," missile experts Hans Kristensen and Matt Korda wrote for the Federation of American Scientists.

Trump's review anticipates this problem and recommends the Pentagon develop new space-based sensors to provide advance notice of potential rocket launches. "Space-basing for sensors provides significant advantages," according to the review. "Such sensors take advantage of the large area viewable from space for improved tracking and potentially targeting of advanced threats."

But these sensors would be "easily overwhelmed, easily attacked and enormously expensive," warned Laura Grego, a missile expert at the Union of Concerned Scientists.

The United States could place the entire boost-phase defense system in space, obviating the need for around-the-clock air patrol. The Defense Department "will identify the most promising technologies and estimated schedule, cost and personnel requirements for a possible space-based defensive layer that achieves an early operational capability for boost-phase defense," the review states.

But even orbital defenses must be close to their targets. Space-based boost-phase intercept "would require U.S. interceptors to be placed in very close proximity to the target––almost certainly revealing itself to an adversary’s radar network," Kristensen and Korda noted.

"The interceptor itself would also have to be fast enough to chase down an accelerating missile, which is technologically improbable, even years down the line."

"Boost-phase missile defense—whether kinetic or directed energy, and whether based on land, sea, air, or in space—is not practical or feasible," a 2012 National Academy of Sciences study concluded.