F-35s vs. the World: Who Will Win Canada's Big Fighter Jet Deal? 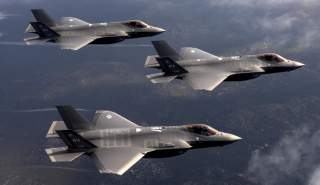 Two of the four companies competing to build new fighter jets for the Royal Canadian Air Force in early July 2019 threatened to quit the contest.

American firm Boeing and Europe’s Airbus, respectively the builders of the F/A-18E/F Super Hornet and the Eurofighter Typhoon, claimed the Canadian government has unfairly tilted the fighter competition toward U.S.-based Lockheed Martin.

Lockheed manufactures the F-35 stealth fighter. Canada has a $500-million stake in the F-35 program. Swedish firm Saab with its Gripen fighter also is competing to replace the RCAF’s aging, early-model F/A-18s.

“Pat Finn, the defence ministry’s top official in charge of procurement, confirmed one of the four companies had sent a formal letter but gave no details,” the wire service added. “The final request for proposals is due out on July 17, [2019] and modifications are still being considered.”

“We continue to engage all four of them,” Finn told Reuters. “We have had some comments (such as) ‘If changes are not made in such a place then we would frankly consider possibly not bidding.’”

The companies’ objections are only the latest complications in Canada’s faltering effort to buy a new fighter for its beleaguered air force.

The Canadian government in May 2019 backed down from a requirement that the supplier of the RCAF’s new fighter also channel work on the planes to Canadian companies.

The United States had objected to the requirement and threatened to pull the Lockheed -made F-35 stealth fighter from the competition to replace the current 85 F/A-18s with as many as 88 new jets.

Reciprocal industrial benefits are common in fighter competitions. The idea is that a company that builds airplanes for a foreign country also should ensure that companies in that country get subcontracts to supply parts to the main production effort. That way, a government tender to a foreign company also supports some domestic jobs.

There was a catch as Ottawa relaunched its $19-billion competition to the replace the 1980s-vintage F/A-18s, which lack key upgrades and rapidly are becoming obsolete, according to the Canadian government’s own auditors. The RCAF wanted the F-35 to compete in the contest alongside the Gripen, the Eurofighter and the F/A-18E/F.

But Canada is already a partner in the international F-35 program. After paying $500 million into the plane’s development effort, Canada became eligible for portions of the production process. Canadian aerospace companies over the past 20 years have received contracts worth no less than $1.5 billion to build parts for the F-35.

The F-35 program office in the United States claims it apportions work on F-35 production strictly by merit. In requiring that the F-35 program guarantee to Canadian firms a certain amount of work as a term of competing for the RCAF fighter contract, Ottawa violated its agreement with the F-35 program.

After Washington threatened to pull the F-35 from the Canadian contest, Ottawa backed down. “The Canadian government will allow a ‘flexible approach’ in determining industrial benefits for the new fighter jet program, making way for Lockheed Martin and the U.S. government to bid on the project,” National Post reported.

But the concessions to Washington and Lockheed appear to have backfired. If Boeing and Airbus drop out of the contest, Canada will have few options and no means by which to compel Lockheed to keep down costs and meet deadlines. If Saab also drops out, Canada’s fighter acquisition could become non-competitive and potentially a political non-starter.

The possibility of yet another programmatic failure should worry Canadian acquisitions officials. Botched fighter buys in recent years have roiled the country’s politics.

In 2010, Canada's Conservative Party government announced plans to acquire 65 new F-35 stealth fighters by 2020. But the government never fairly compared the F-35 to rival fighter types such as the Eurofighter Typhoon, the Auditor General of Canada concluded in a 2018 report.

Further delays, perhaps resulting from a collapse of the current competition, could be the worst-case scenario for the Canadian air force.