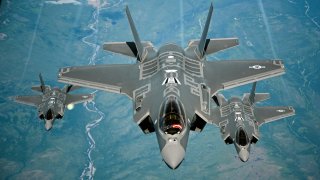 Here's What You Need To Remember: It’s also worth noting that in the past F-35’s have performed very well at Red Flag. In 2017, kill ratios of up to 15:1 were cited for the F-35. While the current exercise is likely designed to be harder than previous Red Flags due to a change in what the U.S. military is training for, the F-35 still performed well.

Charlie Gao studied political and computer science at Grinnell College and is a frequent commentator on defense and national-security issues. This first appeared last year.