F-82 Twin Mustang: The Crazy Fighter You Never Heard Of 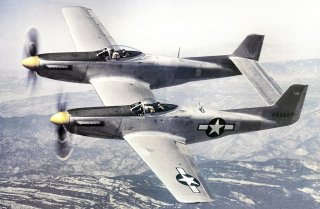 The P-51 Mustang of World War II fame was a marvel of mass production: thanks to five different fuselage sections, the famous fighter could be built in record time. It was also remarkably quickly developed: the first P-51 prototype took to the skies just 149 days after the platform’s development contract.

The Mustang was arguably one of the best fighters of the war, not only for its technological superiority, but also by merit of the sheet number of Mustangs that flew off production lines: over fifteen thousand airframes in total. But, there was a second, lesser-known Mustang: the F-82 Twin Mustang.

The Twin Mustang was essentially two somewhat modified Mustangs joined together. Strange as it may look, the Air Force wanted the Twin Mustang to fill a unique role as a very long range bomber escort fighter that would have been used to defend Boeing B-29 Superfortresses from Japanese interceptor sorties during bombing runs over Japan. The Japanese Empire unconditionally surrendered before the Twin Mustang could be pressed into service however.

Though outwardly quite similar to the original Mustang, the Twin Mustang fighter aircraft was actually substantially different. The Twin Mustang’s two fuselages differed from the original Mustang design in that they were both lengthened by almost five feet in order to accommodate additional space for extra fuel and equipment. With the use of extra fuel stored in drop tanks attached underneath the Twin Mustang’s wings, the range was prodigious. In 1947, a Twin Mustang set a world record by flying nonstop from New York to Hawaii, a distance of over five thousand miles in under fifteen hours.

Interestingly, both the Twin Mustang could be flown from either cockpit: in one sat the pilot, and in the other, the co-pilot and navigator. Flying with two pilots helped to reduce fatigue on the long-range bomber escort missions the Twin Mustang was intended for.

Postwar, the Twin Mustang’s role as a long-range bomber escort became more important. In 1947, the Soviet Union revealed their Tu-4, a reverse-engineered American B-29 Superfortress. This shocked American war planners, and gave special importance to the Twin Mustang, as it was the only airplane with sufficient range that the United States had that could accompany American bombers during long flights over the Soviet Union and be expected to return.

Ultimately the Twin Mustangs became obsolete. Superior jet engine designs—both American and Soviet—eliminated the edge that the propeller-driven aircraft had enjoyed over other airframes. With its two pilots and straight wings, the Twin Mustang was slower and less maneuverable than jet-powered airplanes of the era. It just couldn’t compete against the jet airplanes that faced American forces in Korea and was rapidly phased out of service.

Ultimately the Twin Mustang had a very short operational lifespan, at about two years, thanks to the Republic F-84 Thunderjet taking over the bomber escort role. Though short and perhaps not the most effective of the post—World War Two fighter designs, it makes for an interesting—and largely forgotten—piece of aviation history.