FACT: The Death Penalty Is 'Dying Out'. Here's Why. 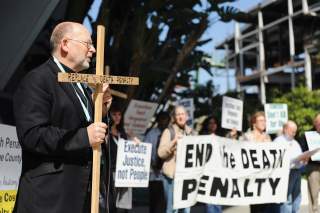 The U.S. federal government recently ordered the death penalty to be reinstated for the first time in sixteen years and has scheduled the execution of five death row inmates. This policy change goes against the widespread trend toward fewer executions.

In many U.S. states where executions are still legal, none have been carried out for years and the law is mainly symbolic. Kansas, for example, has not executed any prisoners in over forty years. The U.S. federal government, similarly, never officially abolished the death penalty but has had a moratorium on the practice since 2004 – a moratorium ended by the new policy ordered by Attorney General William Barr.

Harvard University’s Steven Pinker has chronicled the decline of capital punishment in his book, The Better Angels of Our Nature. He estimated that the execution rate in the United States has been falling for four centuries, from nearly 3.5 executions per 100,000 people in the 17th century.

Trends against capital punishment can also be observed abroad as well. Consider Europe. Prior to the Enlightenment, European nations once used the death penalty for a vast number of crimes. England, for example, had 222 capital offenses in its legal system well into the 18th century. Until the early 19th century, it deemed many minor crimes, such as stealing anything worth more than four dollars in today’s currency, to be worthy of execution. As the values of the Enlightenment spread, that number of capital offenses shrunk to four by the middle of the 19th century. Today, in Europe, capital punishment remains legal only in Belarus and Russia.

The move to reinstate capital punishment federally in the United States represents a reversal after more than a decade-long hiatus in the federal use of capital punishment. But opponents of the practice can take heart in the successful abolition of the death penalty in an increasing number of U.S. states and countries around the world.

Chelsea Follett is the Managing Editor of HumanProgress.org, a project of the Cato Institute which seeks to educate the public on the global improvements in well-being by providing free empirical data on long-term developments. Her writing has been published in the Wall Street Journal, USA Today, Newsweek, Forbes, The Hill, The Washington Examiner and Global Policy Journal. She was named to Forbes’ 30 Under 30 list for 2018 in the category of Law and Policy. She earned a Bachelor of Arts in Government and English from the College of William & Mary, as well as a Master of Arts degree in Foreign Affairs from the University of Virginia, where she focused on international relations and political theory.