Fact: The First 'Aeronauts' Used Research Balloons (And Made History) 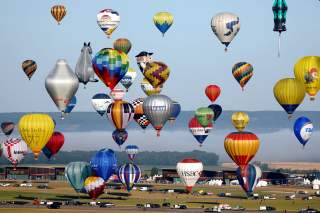 Near the beginning of the new film “The Aeronauts,” a giant gas-filled balloon called the “Mammoth” departs from London’s Vauxhall Gardens and ascends into the clouds, revealing a bird’s eye view of London.

To some moviegoers, these breathtaking views might seem like nothing special: Modern air travel has made many of us take for granted what we can see from the sky. But during the 19th century, the vast “ocean of air” above our heads was a mystery.

These first balloon trips changed all that.

Directed by Tom Harper, the movie is inspired by the true story of Victorian scientist James Glaisher and the aeronaut Henry Coxwell. (In the film, Coxwell is replaced by a fictional aeronaut named Amelia Wren.)

In 1862, Glaisher and Coxwell ascended to 37,000 feet in a balloon – 8,000 feet higher than the summit of Mount Everest, and, at the time, the highest point in the atmosphere humans had ever reached.

As a historian of science and visual communication, I’ve studied the balloon trips of Glaisher, Coxwell and others. Their voyages inspired art and philosophy, introduced new ways of seeing the world and transformed our understanding of the air we breathe.

Before the invention of the balloon, the atmosphere was like a blank slate on which fantasies and fears were projected. Philosophers speculated that the skies went on forever, while there were medieval tales of birds that were so large they could whisk human passengers into the clouds.

The atmosphere was also thought of as a “factory of death” – a place where disease-causing vapors lingered. People also feared that if they were to ascend into the clouds, they’d die from oxygen deprivation.

Early balloon flights were difficult to pull off and dangerous. Aeronauts and passengers fell to their deaths when balloons unexpectedly deflated, caught fire or drifted out to sea. Partly due to this inherent danger, untethered balloon flight became forms of public entertainment, titillating crowds who wanted to see if something would go wrong. The novelist Charles Dickens, horrified by balloon ascents, wrote that these “dangerous exhibitions” were no different from public hangings.

Over time, aeronauts became more skilled, the technology improved and trips became safe enough to bring along passengers – provided they could afford the trip. At the time of Glaisher’s ascents, it cost about 600 pounds – roughly US$90,000 today – to construct a balloon. Scientists who wanted to make a solo ascent needed to shell out about 50 pounds to hire an aeronaut, balloon and enough gas for a single trip.

The view of angels

Some of the first Europeans who ascended for amusement returned with tales of new sights and sensations, composed poems about what they had seen and circulated sketches.

Common themes emerged: the sensation of being in a dream, a feeling of tranquility and a sense of solitude and isolation.

“We were lost in an opaque ocean of ivory and alabaster,” the balloon travelers Wilfrid de Fonvielle and Gaston Tissandier recalled in 1868 upon returning from one of their voyages.

In an 1838 book, one of the most prolific writers on the topic, professional flutist Monck Mason, described ascending into the atmosphere as “distinct in all its bearings from every other process with which we are acquainted.” Once aloft, the traveler is forced to consider the “world without him.”

French astronomer Camille Flammarion wrote that the atmosphere was “an ethereal sea reaching over the whole world; its waves wash the mountains and the valleys, and we live beneath it and are penetrated by it.”

Travelers were also awestruck by the diffusion of light, the intensity of colors and the effects of atmospheric illumination.

One scientific observer in 1873 described the atmosphere as a “splendid world of colors which brightens the surface of our planet,” noting the “lovely azure tint” and “changing harmonies” of hues that “lighten up the world.”

And then there were the birds-eye views of the cities, farms and towns below. In 1852, the social reformer Henry Mayhew recalled his views of London from the perch of “an angel:” “tiny people, looking like so many black pins on a cushion,” swarmed through “the strange, incongruous clump of palaces and workhouses.”

To Mayhew, the sights of farmlands were “the most exquisite delight I ever experienced.” The houses looked “like the tiny wooden things out of a child’s box of toys, and the streets like ruts.”

So deep was the dusk in the distance that it “was difficult to tell where the earth ended and the sky began.”

A laboratory for discovery

The atmosphere was not just a vantage point for picturesque views. It was also a laboratory for discovery, and balloons were a boon to scientists.

At the time, different theories prevailed over how and why rain formed. Scientists debated the role of trade winds and the chemical composition of the atmosphere. People wondered what caused lightning and what would happen to the human body as it ascended higher.

To scientists like Flammarion, the study of the atmosphere was the era’s key scientific challenge. The hope was that the balloon would give scientists some answers – or, at the very least, provide more clues.

James Glaisher, a British astronomer and meteorologist, was already an established scientist by the time he made his famous balloon ascents. During his trips, he brought along delicate instruments to measure the temperature, barometric pressure and chemical composition of the air. He even recorded his own pulse at various altitudes.

In 1871 he published “Travels in the Air,” a collection of reports from his experiments. He didn’t want to simply write about his findings for other scientists; he wanted the public to learn about his trips. So he fashioned his book to make the reports appealing to middle-class readers by including detailed drawings and maps, colorful accounts of his adventures and vivid descriptions of his precise observations.

He gave a series of popular lectures, during which he relayed findings from his trips to riveted audiences. Two years later, he published an English translation of Flammarion’s account of his balloon travels.

The trips of Glaisher and others gave scientists new insights into meteors; the relationship between altitude and temperature; the formation of rain, hail and snow; and the forces behind thunder.

And for members of the public, the atmosphere was transformed from an airy concept into a physical reality.