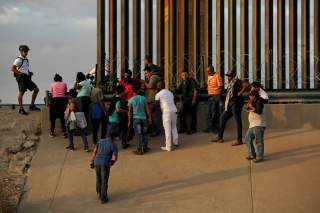 Now that workers have a way to cross legally, they don’t need to cross illegally.

Since 2007, Mexico has seen a massive surge of gang warfare and violence unlike anything it has witnessed since the 1980s. Intuitively, this fact should lead more Mexicans to want to flee to the United States. Yet that hasn’t happened. In fact, illegal immigration from Mexico has all but disappeared. In 2019, Central Americans have now far outnumbered their more populous neighbor.

Figure 1 illustrates the relationship between the homicide rate in Mexico and the rate at which Border Patrol agents apprehended Mexicans. The number of apprehensions per agent is the best available measure of total illegal crossings because it controls for the level of enforcement. More agents will lead to more apprehensions without more crossings.

As violence dwindled in the late 1990s and early 2000s—from its peak of 21 homicides per 100,000 residents in 1986 to 8 in 2007—Mexican crossings fell precipitously as well, dropping from a 1986 peak of 510 apprehensions per agent to 60 in 2007. Suddenly, in 2008, the homicide rate jumped and remained at least twice as high as 2007, currently standing at three times the rate that year and the highest rate of the entire period. Yet Mexican illegal crossings continued to fall and have not returned.

The most important change related to Mexican immigration to the United States was the large increases in temporary work visas issued under the H-2A agricultural and H-2B nonagricultural programs. Figure 2 shows the number of H-2 and H-2B workers admitted from Mexico for each year from 1979 to 2019. In the late 1990s, the number of guest workers admitted legally started to rise, and in the post-2009 recession period, they have skyrocketed. Now that workers have a way to cross legally, they don’t need to cross illegally.

Most of the uptick in violence in Mexico is from gangs. Guest workers allow normal Mexican workers to obtain enough resources to relocate their families or otherwise insulate themselves from the gang wars. It also makes more violent communities more tolerable if adequate food and shelter are not also an issue, leading fewer to seek to enter illegally. Overall, this economic-focused strategy has clearly succeeded, and as I point out in my recent policy analysis, Congress should look to replicate it for Central America.

This article by David Bier first appeared Cato on Liberty in August 2019.