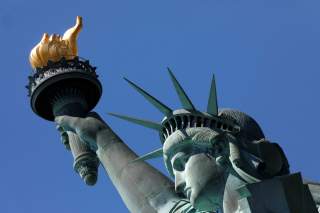 Pilgrim and Puritan settlers who arrived in New England in the early 17th century brought with them the tradition of Thanksgiving that was adopted by waves of immigrants who followed. This analysis first published Jan. 15, 2004, examines the role immigration has played — and continues to play — in the evolution of the United States.

The United States came into being through mass movements of populations. The movements came in waves from all over the world and, depending upon the historical moment, they served differing purposes, but there were two constants. First, each wave served an indispensable economic, political, military or social function. The United States — as a nation and regime — would not have evolved as it did without them. Second, each wave of immigrants was viewed ambiguously by those who were already in-country. Depending upon the time or place, some saw the new immigrants as an indispensable boon; others saw them as a catastrophe. The debate currently under way in the United States is probably the oldest in the United States: Are new immigrants a blessing or catastrophe? So much for the obvious.

What is interesting about the discussion of immigration is the extent to which it is dominated by confusion, particularly about the nature of immigrants. When the term "immigrant" is used, it is frequently intended to mean one of two things: Sometimes it means non-U.S. citizens who have come to reside in the United States legally. Alternatively, it can mean a socially or linguistically distinct group that lives in the United States regardless of legal status. When you put these together in their various permutations, the discourse on immigration can become chaotic. It is necessary to simplify and clarify the concept of "immigrant."

Initial U.S. immigration took two basic forms. There were the voluntary migrants, ranging from the Europeans in the 17th century to Asians today. There were the involuntary migrants — primarily Africans — who were forced to come to the continent against their will. This is one of the critical fault lines running through U.S. history. An immigrant who came from China in 1995 has much more in common with the Puritans who arrived in New England more than 300 years ago than either has with the Africans. The former came by choice, seeking solutions to their personal or political problems. The latter came by force, brought here to solve the personal or political problems of others. This is one fault line.

There was a second group of people in this class: Mexicans. A substantial portion of the United States, running from California to Texas, was conquered territory, taken from Mexico in the first half of the 19th century. Mexico existed on terrain that Spain had seized from the Aztecs, who conquered it from prior inhabitants. Again, this should not be framed in moral terms. It should be framed in geopolitical terms.

The response of the Mexicans varied, as is always the case, and they developed a complex identity. Over time, they accepted the political dominance of the United States and became, for a host of reasons, U.S. citizens. Many assimilated into the dominant culture. Others accepted the legal status of U.S. citizens while maintaining a distinct cultural identity. Still others accepted legal status while maintaining intense cultural and economic relations across the border with Mexico. Others continued to regard themselves primarily as Mexican.

The U.S.-Mexican border is in some fundamental ways arbitrary. The line of demarcation defines political and military relationships, but does not define economic or cultural relationships. The borderlands — and they run hundreds of miles deep into the United States at some points — have extremely close cultural and economic links with Mexico. Where there are economic links, there always are movements of population. It is inherent.

Where the group on the conquered side of the border is sufficiently large, self-contained and self-aware, this condition can exist for generations. A glance at the Balkans offers an extreme example. In the case of the United States and its Mexican population, it also has continued to exist.

This never has developed into a secessionist movement, for a number of reasons. First, the preponderance of U.S. power when compared to Mexico made this a meaningless goal. Second, the strength of the U.S. economy compared to the Mexican economy did not make rejoining Mexico attractive. Finally, the culture in the occupied territories evolved over the past 150 years, yielding a complex culture that ranged from wholly assimilated to complex hybrids to predominantly Mexican. Secessionism has not been a viable consideration since the end of the U.S. Civil War. Nor will it become an issue unless a remarkable change in the balance between the United States and Mexico takes place.

The movement from Mexico is, from a legal standpoint, a cross-border migration. In reality, it is simply an internal migration within a territory whose boundaries were superimposed by history. Put differently, if the United States had lost the Mexican-American war, these migrations would be no more noteworthy than the mass migration to California from the rest of the United States in the middle of the 20th century. But the United States did not lose the war — and the migration is across international borders.

It should be noted that this also distinguishes Mexican population movements from immigration from other Hispanic countries. The closest you can come to an equivalent is in Puerto Rico, whose inhabitants are U.S. citizens due to prior conquest. They neither pose the legal problems of Mexicans nor can they simply slip across the border.

The Mexican case is one-of-a-kind, and the difficulty of sealing the border is indicative of the real issue. There are those who call for sealing the border and, technically, it could be done although the cost would be formidable. More important, turning the politico-military frontier into an effective barrier to movement would generate social havoc. It would be a barrier running down the middle of an integrated social and economic reality. The costs for the region would be enormous, piled on top of the cost of walling off the frontier from the Gulf of Mexico to the Pacific.

If the U.S. goal is to create an orderly migration process from Mexico, which fits into a broader immigration policy that includes the rest of the world, that probably cannot be done. Controlling immigration in general is difficult, but controlling the movement of an indigenous population in a borderland whose frontiers do not cohere to social or economic reality is impossible.

This is not intended to be a guide to social policy. Our general view is that social policies dealing with complex issues usually have such wildly unexpected consequences that it is more like rolling the dice than crafting strategy. We nevertheless understand that there will be a social policy, hotly debated by all sides that will wind up not doing what anyone expects, but actually will do something very different.

The point we are trying to make is simpler. First, the question of Mexican population movements has to be treated completely separately from other immigrations. These are apples and oranges. Second, placing controls along the U.S.-Mexican frontier is probably impossible. Unless we are prepared to hermetically seal the frontier, populations will flow endlessly around barriers, driven by economic and social factors. Mexico simply does not end at the Mexican border, and it hasn't since the United States defeated Mexico. Neither the United States nor Mexico can do anything about the situation.