FACT: The Sig Sauer P320 Is a Serious Match For the Glock 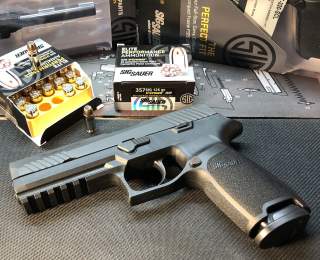 Key Point: The P320 also features a “modular” frame system that allows the metal internal frame that holds the pistol’s trigger and fire control mechanism to be removed from the plastic grip, so the grip can be swapped for something more ergonomic.

When a variant of the SIG Sauer P320 was adopted by the U.S. Army over the Glock as the M17, it was the first win for SIG in the handgun market in a long time. Across the world, versions of their P226 pistol were being replaced by Glocks. The British Army, Navy SEALs, and various police agencies have all replaced “second gen” SIGs like the P226 and P229 with Glocks.

But could the P320 reverse this trend?

In many ways, the P320 is SIG’s answer to the Glock, with a few differences. Both pistols feature primarily polymer construction of the grip, a striker-based firing mechanism, and tilting barrel actions. The capacity of the full-size pistols and compact pistols are identical at seventeen and fifteen rounds of 9x19mm, respectively.

But the P320 has some key differences that may make it more appealing to current SIG users. The P320’s original trigger shape is practically identical to that on legacy SIG pistols, featuring significant space behind the trigger resulting in a longer take up. It also lacks the trigger safety on the Glock, but it retains other safeties inside the pistol. This results in a smoother trigger face, which may be an ergonomic quirk that endears it to current SIG users.

The decision to omit the trigger safety is not without detractors. The P320 was known to discharge if dropped on the striker plate at a certain angle. Some have suggested that this could have been aggravated by the lack of a trigger safety, as most other “Glock-alike” pistols have a trigger safety like the Glock.

The P320 also features a “modular” frame system that allows the metal internal frame that holds the pistol’s trigger and fire control mechanism to be removed from the plastic grip, so the grip can be swapped for something more ergonomic.

The usefulness of such a feature might be suspect, as most military and police organizations are unlikely to allow an individual to swap the grips on their pistol. However, it has allowed for the P320 to be adapted into a folding stocked pistol relatively easily, which may be of interest to some end users.

The biggest opportunity for the P320 is probably coming up with the French military’s upcoming replacement of their older MAC modèle 1950 and PAMAS G1 pistols with a new 9x19mm handgun. France’s national police and paramilitary Gendarmerie already utilize over 200,000 SIG SP2022 handguns and have been largely satisfied with them, continuing orders into 2018. However, the newer P320 might compete and win the upcoming military contract if France is satisfied with the P320’s features.