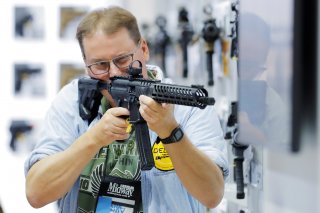 March weather has long been described as "In like a lion, out like a lamb," but for firearms retailers, sales may have roared like never before.

The total National Instant background Check System (NICS) checks for March of 2021 set an all-time record for the month – it was truly the king of months in terms of overall checks, which nearly reached 4.7 million.

That surpassed the record that had been set in January with more than 4.3 million checks. Keeping the trend going, December 2020 now ranks as the third-highest month at 3.94 million in total checks.

According to data from Ammoland.com, sales may have actually dipped.

This has led to some confusion because as noted, background checks don't equate to one-for-one gun sales. Based on the data from the report, just shy of two million guns were sold as estimated by the records in the NICS system, with most being pistols at just over 1.1 million.

While the overall sales may be down by some twenty percent from March 2020, it is still the second-highest March in terms of firearms sales.

Adding to the confusion is that the National Shooting Sports Federation (NSSF), which also tracks sales, really only follows the sales of "new" firearms. These figures don't compare the number of firearms that may have changed hands via private sales at gun shows and indirect person-to-person sales.

Then there is the fact that the Bureau of Alcohol, Tobacco, Firearms and Explosives (BATFE) has certified twenty-five states to substitute various permits for NICS checks because the permit required an NICS check. Currently, around seven million Americans have those permits, which can be used instead of a traditional check. Firearm sales conducted by one of the permit holders are not included in the overall NICS firearms sales numbers.

As a result, it is impossible to know exactly how many firearms may have changed hands in March.

Critics of the system, including many lawmakers, have argued for a universal background check system that would track every firearm. But clearly it would be impossible even to know where to start as private sales that are legal in many states make it impossible to know who exactly may have purchased a firearm.

What is an absolute certainty is that at least two million additional firearms are now in private hands, joining the more than 470 million already owned across the United States. And even with a slight slowdown in sales in March, there is no reason to believe that 2021 won't be another strong year in overall firearms sales.