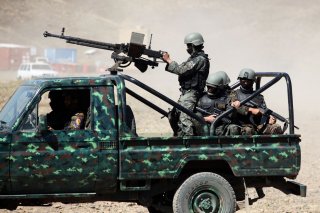 Big and showy weapons systems involving stealth, networked sensors, remote piloting, hypersonic speed—these sop up much of the public’s attention and a lot of government funding. High performance, high technology, and highly expensive, they are the playthings of empires. On the other end of the spectrum is the lowly pickup truck.

Some of the earliest armed trucks, or technicals as they’re called, cut their teeth during the Second World War where they were prized for good mobility and reliability in austere North African desert conditions. The Long Range Desert Group of Libyan fame mated artillery and machine guns to Ford and Chevrolet trucks and fought Axis forces using shoot-and-scoot tactics, or gathered intelligence for the Allies.

Several decades later, Time magazine dubbed the tail-end of the 1970s and 1980s Chadian-Libyan conflict the Toyota War, due to Chadian battlefield dominance thanks to their converted Toyota gun trucks. The trucks gained further notoriety in the 1990s, when many Somali forces, and especially the powerful warlord Mohamad Farrah Aidid maintained scores of Toyota Land Cruisers with devastating effect.

The 2010s and 2020s are the technical’s golden age—an age still dominated by Toyota. The Toyota brand is prized for robustness in the most rugged of terrain, and two of their models, the Land Cruiser and Hilux, effectively serve as today’s light calvary-equivalent.

Both the Land Cruiser and Hilux are ideal for tough off-road day trips—and in service with rebel groups that need mobile firepower, but can’t afford to operate tanks or armored personnel carriers. The Toyota models in question benefit from having a global parts supply chain thanks to world-side sales, a simple design that is easily serviceable with basic automotive tools, are not reliant on hard-to-repair electronic management systems, and have good fuel economy.

In April, the human rights and environment watchdog Global Witness released a series of documents that they say details how Sudan’s paramilitary Rapid Support Forces got their hands on hundreds of 4x4 trucks via auto dealers in the United Arab Emirates. The RSF converted their illicitly bought Toyota pickups into technicals by equipping the trucks with heavy machine guns and anti-aircraft cannons.

Global Witness managed to get a comment from Toyota that said, “Toyota has a strict policy not to sell vehicles to potential purchasers who may use or modify them for paramilitary or terrorist activities, and have procedures in place to prevent their products from being diverted for unauthorised military use.” They also explained that Toyota “complies with export control and sanctions laws, and requires dealers and distributors to do the same.” However, when purchasing a truck, a buyer is unlikely to explain that their truck purchase is intended to be converted into a technical.

Toyota technicals aren’t just limited to rebel groups though. In 2016, the BBC acquired exclusive photo evidence of UK special operations troops riding in what appear to be modified Toyota Land Cruiser pickups. Like their rebel counterparts, they were armed to the teeth, carrying at least one M2 Browning heavy machine gun in addition to a number of small arms and antitank weapons.