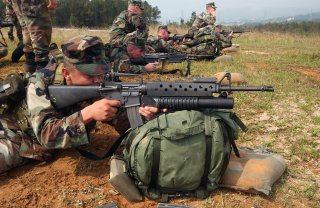 Introduced just prior to America's involvement in the Vietnam War, the M-16 was quite different from any weapon in use at the time. It revolutionized firearm design with its use of composite materials and intermediate caliber ammunition—but its appearance was one not immediately loved by everyone who carried one.

The aerospace-grade aluminum receiver and composite stock and grip reduced weight, but up until that point American military rifles were still a mix of steel, and wood that had been true since the days of the American Revolution. The advanced M-16 almost looked like a toy—and that likely created a myth that toymaker Mattel had played a role in developing the Armalite firearm.

The myth is not true, but there is a bit more to the story.

Mattel didn’t develop the weapon but Colt, the M-16’s maker, reportedly did turn to Mattel to make some of the early plastic handgrips. Some of those did show up in Vietnam and that led to some confusion when soldiers were issued the new gun. However, this part of the story is far from cut and dry—dozens of veterans claim to have seen the logo on their grips, but collectors have countered that not one example has ever come up for sale in recent years. No one has come forward with an example in their collection and no museum has an M-16 with a Mattel-made grip.

So did Mattel make the grip? Opinions differ and until one shows up the matter may likely never be fully resolved.

What is a fact is that Mattel did introduce its M-16 Marauder in 1966—the same year the actual firearm went to Vietnam. It wasn't a real gun at all but was the first toy of the M-16.

Unlike other toy guns of the post-World War II era, the Marauder didn't need batteries or caps to provide a “realistic” sound of a weapon being fired. More importantly this toy version was close in size to the actual M-16, and while it did feature a ridiculously large magazine mag well—to hold the noise-making device that simulated the sound of gunfire—it was fairly accurate looking at a distance.

Visually it was so accurate that at least a couple of the toy guns were even used in the 1968 film The Green Berets. The M-16 Marauder appears in two different scenes. In each it is carried by Col. Kirby (John Wayne)—first during the nighttime battle sequence and later it is the gun that Kirby smashes against a tree so that it couldn't be captured by the Vietcong.

As many kids who own one can likely attest, the Marauders were rather fragile and could be all too easily broken in backyard battles so it makes sense that the movie would use this—especially as the aerospace-grade aluminum receivers couldn't be so easily broken by striking them against a tree!

Because of the presence of the Marauder in that film, and the fact that it did reasonably recreate the M-16, there has been a persistent rumor that Mattel produced the weapon. So perhaps those who believe they saw a Mattel-made grip on their M-16 in Vietnam may have watched The Green Berets one too many times.