Farmers Will Love This Plan To Fight Climate Change at Home 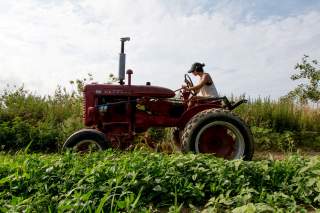 Democratic presidential contenders are increasingly singling out agriculture as the next great frontier for climate action, pushing plans that would empower rural and farming communities while addressing the sector’s contributions to greenhouse gas emissions.

That trend represents a mounting scientific consensus that any effective efforts to counter global warming will need to involve overhauling land use, which accounts for almost a quarter of emissions globally. It also comes two weeks after the U.N. Intergovernmental Panel on Climate Change (IPCC) released a sweeping report highlighting the extent to which agriculture and other forms of land use are contributing to climate change.

On Wednesday, Gov. Jay Inslee (D-WA) became the latest Democratic presidential hopeful to home in on the connection between agriculture and global warming. Inslee, who has devoted his entire campaign to climate action, rolled out a “Growing Rural Prosperity” initiative, the sixth major climate-oriented plan from the governor.

The plan “will reinvigorate America’s rural and farming communities, while empowering farmers to benefit from enormous economic opportunities as we build America’s clean economy and work to defeat climate change,” Inslee said in a statement.

Under the new proposal, farmers would play a key role in combatting climate change. A government-funded Carbon Farming initiative would pay farmers for their efforts to remove carbon emissions from the atmosphere, as well as methane reduction projects. Inslee would also launch a new Advanced Research Projects Agency–Agriculture (ARPA-Ag) to work on innovation in the sector, along with boosting biofuel efforts nationally.

The plan is framed as a boon to rural communities, and Inslee pledges to “revitalize rural economies” through an expansion of renewable energy coupled with an expansion of rural broadband connectivity. The proposal, moreover, would strengthen protections for farmworkers, who are already suffering the impacts of climate change, studies show. Inslee would also “support new, diverse, women, and young farmers” in their efforts to establish careers.

Additionally, the plan would seek to improve forest health and public lands, along with “new protections” for indigenous spaces. Budgeting for the Conservation Stewardship Program would also triple under Inslee, bolstering support for farmers conserving their land.

The governor’s proposal is sweeping in scope and comes at a moment of reckoning for agriculture. On August 8, the IPCC rolled out a lengthy report specifically identifying the ways in which land use is contributing to global warming. That analysis cites food production as a key point of concern. Cattle and rice fields alone generate around half of all methane emissions, while farming practices more broadly contribute to soil degradation, weakening the planet’s defense against rising temperatures.

Those findings aren’t new — climate scientists have singled out agriculture for years as a leading emissions source. Now, however, the issue is gaining political traction.

Farmers are a key voting demographic in states like Iowa, where the presidential caucus will be important for White House hopefuls. Historically, that has meant candidates shy away from topics that could cost them with voters, like overhauling agriculture. But with climate change emerging as a top concern for voters, Democratic presidential contenders are increasingly identifying land use — and agriculture in particular — as a policy opportunity.

In addition to Inslee, a number of candidates have rolled out rural policy platforms that touch on farming and climate change, in an unprecedented break from prior elections. InsideClimate News reported last week that at least 12 of the Democratic candidates currently running for president have made statements or issued policies connecting agriculture to global warming. Among them are several frontrunners, including Sens. Elizabeth Warren (D-MA) and Bernie Sanders (I-VT).

Many of the 2020 contenders have also endorsed the Green New Deal, a blueprint for swiftly shifting the United States to net-zero emissions. The proposal is vague, but asserts that a change in farming practices will be necessary in order to achieve its end goal. Much like the plans proposed by candidates like Inslee, the Green New Deal calls for a partnership between farmers and the government to cut pollution while advancing sustainable practices.

Even as these efforts gain momentum, they are facing resistance. Scientists with the Department of Agriculture (USDA) have continued to produce reports underscoring the link between the sector and global warming. But President Donald Trump’s administration has downplayed the impacts of climate change and USDA researchers say their work is being stifled. Meanwhile, two USDA bureaus are undergoing a controversial relocation out of Washington, D.C., to the Midwest — a move some employees worry is retaliation for the department’s climate research.

This article originally appeared at ThinkProgress on August 21, 2019.