Favoring Pashtuns in Afghanistan Is Not in Pakistan’s Interest 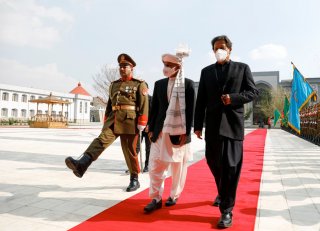 Pakistan’s moral and material support to Afghan Pashtuns, oftentimes at the expense of other Afghan ethnic groups, hasn’t served Pakistan well. Since Pakistan is directly involved in the Afghan peace process, it’s an opportune time for Pakistani policymakers to re-evaluate and correct this aspect of Pakistan’s Afghan policy.

Initially, for the first three decades after Pakistan’s founding, it was Afghanistan that regarded itself as a champion of Pakistani Pashtuns’ rights. With the passage of time, however, Pakistan has acquired the upper hand and has emerged as a champion of Afghan Pashtuns’ rights. The first signs of Pakistan’s ethnic favoritism emerged toward the end of the Afghan jihad in the early 1990s, when ethnic rifts began widening between various Afghan Mujahedin organizations.

In the ensuing civil war, which was fought mainly along ethnic and linguistic lines, and following the collapse of the Najibullah regime in 1992, Pakistan supported the ethnic Pashtun Gulbuddin Hekmatyar against the ethnic Tajik Ahmad Shah Massoud. Later, when the Taliban emerged in Kandahar in 1994, one reason why Pakistan supported them was because of their predominantly Pashtun ethnicity. Similarly, Pakistan was not happy when the United States decided to topple the Taliban regime. Pakistan tried but failed to convince the Taliban to expel Osama bin Laden to avoid the invasion.

Former Pakistani President Pervez Musharraf often used to advise Afghan President Hamid Karzai to include more Pashtuns in his cabinet. During Karzai’s February 2006 visit to Pakistan, Musharraf told him that he would not accept the presence of a Panjsheri Tajik (Afghan intelligence chief Amrullah Saleh) in their bilateral meeting. Karzai responded that in that case, he would not accept the presence of a Punjabi (Pakistani Inter-Services Intelligence Director General Pervez Kayani) in their bilateral meeting either. In recent years, Pakistan has toned down its rhetoric in support of Afghan Pashtuns, but the overall thinking that Afghan Pashtuns are sidestepped and that they could still be better represented seems to have survived.

First, Pashtuns are considered a majority ethnic group in Afghanistan. Since Afghanistan has never conducted any countrywide census to determine the actual size of its population (let alone declared ethnic groups as majority or minority), non-Pashtuns take the idea of Pashtuns’ being a majority with a grain of salt. Despite the controversy surrounding it, the belief that Pashtuns are a majority still persists in parts of Afghanistan and beyond.

Second, Pakistan’s support to Afghan Pashtuns also stems from the fact that multiple Pashtun tribes have members on both sides of the Durand Line, the internationally recognized Afghan-Pakistani border. The idea of Afghan Pashtuns being sidelined will not go down well with Pakistani Pashtuns. Pakistan, however, also has an Urdu-speaking Turkic (Mughal) population that shares ethnic ties with northern Afghanistan’s Turkic population. If ethnicity indeed matters, then shouldn’t Pakistan’s Urdu-speaking Muhajirs be more sympathetic toward their Afghan cousins?

Third, Pakistan considers major non-Pashtun ethnic groups, or at least their leaders, to be under (non-Pakistani) foreign influence. The truth however is that, during the 1990s civil war, Pakistan’s support to Hekmatyar and the Taliban drove most non-Pashtun Afghans to seek modest assistance from India, Iran, and Russia.

Finally, there is a belief that Pakistan’s support to Afghan Pashtuns is aimed at finding a counterweight to the nationalists who interfere in Pakistani internal affairs and challenge the legality of the border. Those Pashtuns who receive support from Pakistan, the argument goes, will give in to the Pakistani point of view concerning the border issue (among other things). That being said, both Hekmatyar and Mullah Omar, showcasing the futility of this policy, refused to endorse the Pakistani position on the Durand Line.

First, due to Pakistani ethnic favoritism, non-Pashtuns in Afghanistan have become suspicious of Pakistan. If Pakistan wants to expand trade and energy ties with Central Asian republics, it will have to improve relations with Afghanistan’s non-Pashtuns, who have close ethnic and linguistic ties with the people of Central Asia. Pakistan will also have to earn and depend on non-Pashtun Afghans’ goodwill as its trade and energy routes will run through their territory.

Second, despite favoring Afghan Pashtuns, Pakistan has neither quashed their irredentist sentiments, nor has it built credible trust with them. Most Afghan Pashtuns, including those residing in areas adjacent to Pakistan, are as (if not more) suspicious of Pakistan as non-Pashtuns. For many Afghan Pashtuns, at least in theory, the Afghan territory doesn’t end at the current Pak-Afghan border; it rather ends on the banks of the Indus River.

First, Afghanistan, where between twenty and thirty ethnic groups reside, is a country of ethnic minorities. Given the ethnic diversity, unless there is impartial, scientific data such as a countrywide census, it is imprudent to assume a particular ethnic group as a majority or minority, and subsequently formulate policies on the basis of such unfounded assumptions.

Second, Afghanistan’s ethnic and tribal makeup is extremely complex. Not only is the Afghan population divided into tens of ethnic groups, but there are also deep divisions, rivalries, and jealousies along tribal and regional lines within each ethnic group. An example below from Kandahar should suffice to sum up the point.

Former Kandahar Police Chief General Abdur Raziq, a tribal Achakzai, grossly misused his title to settle scores with his family rivals from the Noorzai tribe, whose members are found in abundance amongst the Taliban (including the Taliban leader Mawlawi Haibatullah being a tribal Noorzai). While Abdur Raziq’s toughness against the Taliban was appreciated within anti-Taliban circles, most didn’t understand his underlying motive, which kept adding fuel to the insurgency fire in Kandahar.

When foreigners try to support a particular ethnic group in Afghanistan, they most likely will miss the subtleties underlying complex ethnic and tribal issues. To a foreigner, for instance, the tribal affiliation of a Pashtun may not matter much. But to a tribesman, the tribe is his primary source of allegiance. Thus, by promoting ethnic Pashtuns from a certain tribe, without regard to tribal and ethnic sensitivities, foreigners have often sharpened inter-tribal rivalries and intensified inter-ethnic tensions.

Pakistan should stay aloof from playing favorites amongst Afghan ethnic groups and tribes, and should maintain contact with all Afghan domestic stakeholders and factions. Pakistan’s own past experiences should serve as an eye-opener to help it adopt a different approach. By dissociating itself from sophisticated inter-ethnic and inter-tribal affairs, which it can’t solve or manage, Pakistan will gain respectable leverage in the eyes of all Afghans, which in turn will help Pakistan bring all Afghan factions to the negotiating table to reach a durable settlement.