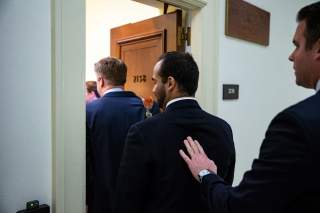 During a meeting in Rome in October 2016, FBI agents shared a sensitive piece of information with a subcontractor for the Democratic party about one of the main targets of the Trump-Russia probe.

According to Fusion GPS founders Glenn Simpson and Peter Fritsch in their new book, “Crime in Progress,” FBI agents surprised Christopher Steele, a former British spy on the DNC and Clinton payroll, by asking him during a meeting in Rome on Oct. 3, 2016 if he had any information about Trump campaign aide George Papadopoulos.

“FBI agents surprised Steele by asking him what he knew about Trump adviser George Papadopoulos,” Simpson and Fritsch wrote.

“Nothing, it turned out; none of Steele’s sources had ever reported on him,” they added.

There is no evidence that Steele or Fusion GPS shared the Papadopoulos tip-off with their Democratic clients, or with reporters. But at time of the Rome meeting, Steele and Fusion GPS were actively meeting with journalists in an effort to disseminate dirt that Steele had collected on the Trump campaign.

And Steele reportedly did share details of the ongoing Trump-Russia investigation with at least two other reporters prior to the 2016 election.

Simpson and Fritsch reveal in their book that Steele admitted under grilling from Yahoo News reporter Michael Isikoff during a meeting at a Washington, D.C. hotel in mid-September 2016 that “he had briefed the FBI about Carter Page and other matters.”

Isikoff would go on to report on Sept. 23, 2016 that U.S. intelligence officials were investigating Page, a Trump campaign adviser who the FBI would surveil through September 2017. Isikoff’s article relied on information from Steele, but did not identify him. The FBI’s applications for surveillance warrants against Page also relied on information from the dossier, even though the salacious document was unverified.

The FBI cut ties with Steele on Nov. 1, 2016 after the bureau realized that the former MI6 officer had disclosed to Mother Jones reporter David Corn that he was working with the FBI. Steele spoke with Corn via Skype for an Oct. 31, 2016 article that revealed sections of the Steele dossier that accused Donald Trump of being in bed with Russia.

Beginning in September 2016, the Fusion GPS team set up meetings for Steele and reporters from The Washington Post, New York Times, ABC News, and The New Yorker.

Two months before Steele’s meeting in Rome, FBI investigators opened Crossfire Hurricane, the code name for the Trump-Russia probe. That catalyst for the investigation was a tip about Papadopoulos that originated with Alexander Downer, who served as Australia’s top diplomat to the U.K. Downer claimed that Papadopoulos told him during a meeting in London on May 10, 2016 that Russia might release information that would help the Trump campaign.

The special counsel’s investigation found no evidence that Papadopoulos handled any information from Russia, or that any Trump associates conspired with Russia.

In addition to working for Fusion GPS and Democrats, the FBI considered Steele a confidential human source (CHS). It is unclear if Steele’s FBI handlers knew at the time of the Rome meeting that the former MI6 officer was working for Fusion GPS, which had contracted for the DNC and Clinton campaign. It is also unclear whether the FBI knew about Steele’s extensive contacts with reporters.

Simpson and Fritsch write that the FBI’s meeting with Steele “yielded an important bit of intelligence for Fusion.”

In the book, Simpson and Fritsch relay Steele’s claim that his FBI contacts were “unusually demanding” during the Rome meeting.

“The atmosphere was charged, the urgency now palpable,” they write, adding that “Steele was being bombarded with intrusive questions and insistent requests” for the former spy to gather information on a variety of subjects.

“Steele promised to do what he could,” Simpson and Fritsch write.

The authors say that Steele “inferred” from the FBI meeting that Papadopoulos “was somehow important” to the overall Trump-Russia investigation.

“This was important information in its own right, suggesting that there was an active Bureau investigation that relied on sources other than Steele. It was also a sign of the FBI’s regard for Steele that it would query him regarding such an important lead,” write Simpson and Fritsch.

“Steele passed that important tidbit on to Simpson, who found it reassuring: The FBI had developed information that independently corroborated Steele’s own reporting, and they seemed to trust him enough to run it by him.”