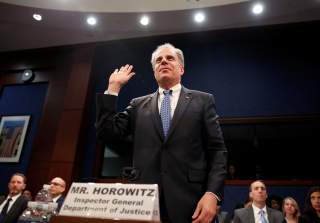 The FBI failed to tell surveillance court judges that investigators developed concerns about the reliability of the Steele dossier after interviewing a source for the document, according to a new report.

According to The Washington Post, sources familiar with the forthcoming Justice Department inspector general’s (IG) report say that FBI agents determined that information from Christopher Steele was not “entirely reliable” after they interviewed a subsource for the former British spy.

The IG’s finding could undercut one of Democrats’ main defenses of Steele, who investigated the Trump campaign in 2016 on behalf of Fusion GPS. Democrats have argued that Steele was a credible source with a solid track record of providing information to the U.S. government.

The FBI relied on information from Steele, a former British spy, in applications for four Foreign Intelligence Surveillance Act (FISA) warrants against Trump campaign adviser Carter Page. Steele’s dossier alleged that Page met secretly with two Kremlin insiders to discuss ways to help the Trump campaign in exchange for a brokerage stake in the sale of Russian oil giant Rosneft.

Steele also reported that Page was part of the Trump campaign’s “well developed conspiracy of cooperation” with Russia, and that it was Page’s idea to release Democratic National Committee emails through WikiLeaks.

The FBI cited some of that information in four FISA warrant applications, the first of which was submitted on Oct. 21, 2016.

The special counsel’s report undercut many of the allegations against Page. It found that nobody on the Trump team acted as a Russian agent or conspired with Russians to influence the 2016 election. It also found that no Americans were involved in hacking or releasing DNC emails.

Steele’s sourcing for his dossier has largely remained a mystery. It is also unclear what steps the FBI took to verify the dossier.

Michael Horowitz, the inspector general, is expected to release the report Monday. He will testify before the Senate Judiciary Committee on Wednesday. The Post also reported that even with the omissions about the reliability of Steele’s information, the FBI still met the relatively low bar needed to obtain the surveillance warrants against Page.

The New York Times has previously reported that FBI agents tracked down and interviewed one of Steele’s sources in January 2017, around the time that BuzzFeed published the dossier.

According to The Times, the FBI agents suspected that the source embellished some of the information provided to Steele. The source was not identified, but was described as a Russian speaker living in the West who hailed from a former Soviet republic.