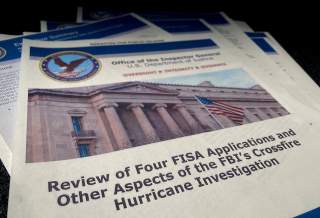 A former Justice Department official said Wednesday that the FBI’s proposed revisions to its surveillance procedures are “a step in the right direction” yet “insufficient” to address problems laid out in a Justice Department inspector general’s (IG) report.

David Kris, a former Justice Department official, provided the assessment in a letter to Judge James Boasberg, who presides over the Foreign Intelligence Surveillance Court (FISC).

Boasberg picked Kris on Friday to assist the court in implementing the FBI’s plans to address a series of errors laid out in the IG report regarding surveillance against Carter Page, a former Trump campaign adviser.

Some House Republicans criticized Boasberg’s pick because Kris has long denied that the FBI misled the FISC in order to obtain the Carter Page wiretaps.

Kris, who was assistant attorney general for national security from 2009 to 2011, also endorsed the possibility that Nunes could face obstruction of justice charges because of his efforts to investigate the FBI.

The IG report found that the FBI committed “basic, fundamental, and serious errors” in the process to obtain wiretap warrants on Page. FBI Director Christopher Wray said in a letter to the FISC on Friday that he “deeply regrets the errors and omissions” identified in the IG report.

Nunes blasted Kris’s selection on Saturday, telling The Daily Caller News Foundation that the choice was “shocking and inexplicable.”

Carter Page also expressed doubt that Kris will held the FBI usher in reforms to the FISA process.

“You appoint Kris for only one reason: you don’t want the system fixed. You just want it to look like you do,” he told The DCNF.

The FBI has proposed 12 reforms to its process for seeking FISAs, including increased training for FBI personnel, more audits of FISA applications, and a change to FBI procedures for collecting and sharing information used to obtain FISA orders.

Wray said in his letter last week that one of the reforms is the use of a new form used to verify information included in FISA requests. Wray told the FBI that the form has been “significantly revised to elicit a fulsome picture of the FBI’s cases.”

Kris said in his letter that the proposed reforms “point in the right direction,” but “do not go far enough to provide the Court with the necessary assurance of accuracy.”

“The FBI is subject to an obligation of scrupulous accuracy in representations made to this Court. It breached that obligation through a series of significant and serious errors and omissions,” he wrote in a 15-page letter.

It is still unclear why the FISC chose Kris to assist with the FBI reform process. Kris is one of eight non-governmental arbitrators, known as amici curiae, that the FISC uses to provide technical expertise in issues involving the use of FISA. The other seven amici curiae have not commented publicly on the Trump-Russia investigation, or the Carter Page FISA issue.

A spokesman for the FISC did not return a phone call seeking comment.