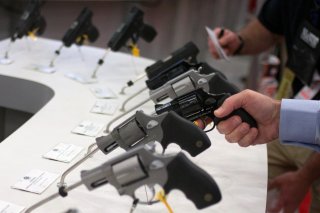 The 22 LR cartridge has long been a favorite for target shooting and introducing new shooters to the sport. Thanks to its low recoil and affordability, it remains the most common ammunition in the world. While it is popular for hunting and target shooting, its stopping power is traditionally believed to be inadequate for personal defense.

However, looking to prove that 22 LR can be a realistic option for backup guns or for those who don’t feel comfortable with centerfire pistols, Federal Premium Ammunition entered the picture with its Punch 22 LR. The first of its kind, the round is a nickel-plated lead-core bullet that is certainly not just another “plinking” round. The cartridge can be pushed at maximum velocities for the deepest penetration through short-barrel handguns.

Federal’s new round has certainly caught the attention of the shooting community. It was announced this week that Federal’s Punch 22 LR has been honored with the 2022 National Rifle Association (NRA) Women’s Gear of the Year Golden Bullseye Award. The company will be recognized during a special reception at the 2022 NRA Annual Meetings & Exhibits in Houston on May 27.

“Until Federal’s introduction of Punch 22 LR, there wasn’t a self-defense option for this platform,” explained Rick Stoeckel, Federal’s product director for rimfire ammunition. “Defense with a handgun isn’t one size fits all. Different shooters have different needs based on their firearm selection. We are proud and grateful to receive this award.”

Federal’s Punch 22 LR bullet has proven to be a significant departure from the standard 22 LR design. The cartridge features a flat nose and utilizes a heavy nickel-plated jacket around a lead core. As a result, it is able to travel faster than competing 22 projectiles while maintaining sufficient straight-line penetration.

“That is a lot to ask from a .22 bullet, which is why other manufacturers have shied away from the challenge,” the company stated. “But Federal’s engineering team pulled it off, giving America’s favorite cartridge a chance to prove itself for protection.”

Shooters have taken a new look at the ubiquitous 22 LR as a result of Federal’s innovation.

Of course, the only “downside” could be the price. While shooters may be opting for 22 LR due to its relatively low cost, a box of fifty 22 LR Personal Defense Punch Rimfire 22 LR rounds currently sells for $10.99.

The NRA’s Golden Bullseyes are considered among the most prestigious awards in the firearms world. The awards acknowledge the finest products available in a variety of shooting sports categories.