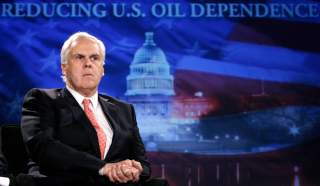 The CEO of FedEx challenged New York Times publisher A. G. Sulzberger to a public debate Sunday after the publication reported that the company didn’t pay any federal taxes in 2018.

FedEx financial filings show that the company “owed no taxes in the 2018 fiscal year overall,” The NYT report reads. The company has also saved $1.6 billion under a 2017 GOP tax reform plan, according to the article. FedEx CEO Frederick Smith called the report “distorted and factually incorrect” in a statement Sunday.

“I hereby challenge A.G. Sulzberger, publisher of the New York Times and the business section editor to a public debate in Washington, D.C. with me and the FedEx corporate vice president of tax,” Smith wrote. He added that the report ignored the “$6 billion of capital” the company “invested in the U.S. economy” in 2018.

More open pugnacity in our public sphere would be one positive externality of Twitter culture. pic.twitter.com/6MITHbIfjO

“Also in 2018 the New York Times cut their capital investments nearly in half to $57 million, which equates to a rounding error when compared to the $6 billion of capital that FedEx invested in the U.S. economy during that same year,” he wrote.

The debate invitation extends to The NYT business section editor, and Smith added that the FedEx corporate vice president of tax would be attending as well. The public offer to debate came after FedEx responded to a request for comment from The NYT for the story.

“FedEx invested billions in capital items eligible for accelerated depreciation and made large contributions to our employee pension plans,” FedEx said, according to The NYT. “These factors have temporarily lowered our federal income tax, which was the law’s intention to help grow G.D.P., create jobs and increase wages.”

The NYT has not replied to the offer of a public debate, and did not immediately respond to a request for comment from the Daily Caller News Foundation.