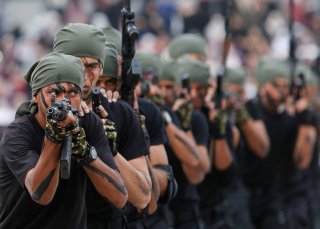 On November 26, 2021, Britain officially banned the “political wing” of Hamas, after proscribing its militant Izz al-Din al-Qassam Brigades twenty years earlier in 2001. Five days later, Australia designated the entirety of Hezbollah as a terrorist organization, extending a ban imposed upon its so-called “armed wing” in 2003.

These are positive, noteworthy developments.

However, they highlight a serious loophole in counterterror policy, whereby some countries adopt the ostensible distinction terrorist groups make between their political and military operations, banning the latter but not the former. This policy has had damaging consequences, allowing these organizations to raise funds, recruit, and plan attacks under the guise of political activities.

The distinction between “political” and “armed” wings of terror groups is entirely artificial and has long been accepted and promulgated by several governments—including the European Union, which still refuses to designate Hezbollah in its entirety—and influential non-governmental organizations (NGOs) claiming human rights agendas. As the evidence clearly indicates, these wings are two sides of the same entity, working in concert towards the same destructive goals.

At best, this fiction reflects a fundamental misunderstanding of the nature of twenty-first-century terrorism. At worst, it demonstrates an unwillingness to properly address terror due to political convenience.

Either way, Western governments fail to publicly acknowledge that “hybrid terror groups” effectively combine militancy with ostensibly legitimate political and civil activity to disseminate their ideology and bolster their international legitimacy. For example, Hamas, the Islamist group ruling Gaza, invested heavily in providing religious, educational, medical, and social services in parallel to building its terror capabilities. In Lebanon, the Iranian proxy Hezbollah followed a similar path since its formation.

For their part, Hezbollah and Hamas do not hide the overlap between their supposed wings. In 2013, Hezbollah spokesman Ibrahim Mousawi stated that “Hezbollah is a single, large organization. We have no wings that are separate from one another.” Likewise, Salah Sh’hadeh, commander of Hamas’s Al-Qassam Brigades, explained that “the political apparatus [of Hamas] is sovereign over the military apparatus.”

Regrettably, many politicized actors continue to excuse the actions of glorified terrorists by attributing them to a “wing,” “arm,” or “branch,” rather than these organizations as a whole. Human Rights Watch (HRW), which itself acknowledged the unified nature of Hamas’s multiple wings in a 2002 report, now euphemistically characterizes Hamas and the EU-designated Popular Front for the Liberation of Palestine (PFLP) as “political movements that also have armed wings.”

The Marxist-Leninist PFLP is a prime case study of the real-world impact of this legitimation. The PFLP is more secretive about its organizational structure than Hamas and Hezbollah. However, open-source data demonstrates that the PFLP has affiliates devoted to agricultural development, women’s advancement, children’s rights, and prisoners’ advocacy. There have been multiple instances when employees at these NGOs have been intertwined with the PFLP’s violent activities. For example, senior officials from the PFLP-linked Union of Agricultural Work Committees and Health Workers Committee are currently standing trial for perpetrating the August 2019 murder of a seventeen-year-old Israeli.

In fact, as NGO Monitor’s research has demonstrated, at least thirteen Palestinian NGOs, including the six recently designated as terror entities by the Israeli government, are tied to the PFLP. Yet, European governments have continued to fund and otherwise support these NGOs to the tune of €200 million since 2011.

This artificial distinction has allowed several EU countries to maintain cooperative relations with terror-tied allies. For example, France’s opposition to a full EU designation of Hezbollah, the de facto leader of the Lebanese government, appears to stem from the close political and economic partnership between the two countries.

The EU has been reluctant to curb funding of PFLP-linked NGOs. In part, this hesitance reflects the sympathies of some European actors to the NGOs’ political agendas, especially pushing for greater pressure on Israel in the form of international isolation. Moreover, European governments’ close, decades-long relationships with these NGOs heavily influence policymaking and agenda-setting.

Nevertheless, the artificial distinctions are beginning to fade. In addition to Australia and Britain’s designations, Germany’s Interior Ministry outlawed a Hamas fundraising organization in May 2021. A statement released by the ministry succinctly summarized how terror groups utilize NGO foreign aid to finance their activities:

Financial support, even for what at first glance appear to be charitable activities, secures the terrorist groups’ power and dominance in the respective region, facilitates the recruitment of activists, and saves the terrorist group money, which in turn can be used to carry out the crimes it plans.

The international community, including governments and civil society groups, has a responsibility to acknowledge this hybrid terrorism in order to combat it effectively. A full EU designation of Hezbollah, outlawing Hamas fundraising organizations à la Germany, and the cessation of all terror-linked NGO funding would be important steps in this direction.

Eitan Fischberger is the Communications & Content Associate at NGO Monitor. His writing has appeared in National Review, NBC News THINK, New York Daily News, and more. He tweets at @EFischberger.