A Fifth-Generation Kalashnikov Is Being Rolled Out to Russian Forces 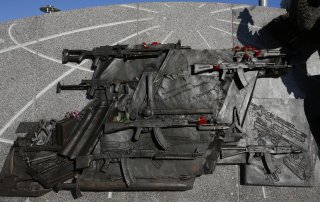 It was nearly seventy-five years ago that the first Soviet soldiers began to receive the original Avtomat Kalashnikova—more commonly known as the AK-47. Now the Kalashnikov Group, the Russian Federation's largest small arms manufacturer, has announced that it has fulfilled the 2021 defense procurement plan for the delivery of the latest AK-twelve assault rifles to Russia’s troops.

“The Kalashnikov Group has timely fulfilled its commitments to the Defense Ministry of Russia for the production and delivery of AK-12 assault rifles in 2021,” the Kalashnikov press office said in a statement, as reported by TASS.

“This work was carried out under a long-term delivery contract of AK-12 assault rifles signed at the Army 2021 international military-technical forum,” the statement said. “The efficiently-organized processes, the team’s smoothly-coordinated work and high responsibility displayed by the company’s staff have helped carry out the defense procurement plan in full and with proper quality.”

This year, the Kalashnikov Group was able to supply tens of thousands of advanced AK-12 assault rifles under the defense procurement plan. The timely fulfillment of the contract for the fifth-generation Kalashnikov rifle to the country’s defense ministry was a top company priority for Kalashnikov Group CEO Vladimir Lepin.

“This is why, despite the persisting restrictions due to the uneasy epidemiological situation, it was especially important to keep the efficiency and the high pace of work,” Lepin explained.

Development of the AK-12 began more than a decade ago, and the early prototype model—designated the AK-200—was presented to then Russian prime minister Vladimir Putin during his 2011 visit to the arms manufacturing plant in Izhevsk. However, a year later, the Russian Ministry of Defense announced that the Russian Army would not adopt the AK-200, as it had millions of surplus AK-74s, which had been introduced in the 1970s.

The cost was cited as one factor, as the AK-200 version was reported to have cost as much as five to six times that of the AK-74M. As a result, a second and more traditional modernization of the AK platform was developed under the designation AK-400. It drew from the experience in the development of the AK-103-3 and took a number of that firearm’s features. The new AK-400 modernization has 54 percent parts commonality with the AK-74M, compared to less than 10 percent for the clean slate AK-12 (AK-200).

The design of the AK-400 modernization was completed in 2015 and the rifle was quickly re-entered into state trials. The 5.45 version took over the AK-12 designation, while the 7.62 version was designated AK-15. The new 5.45-millimeter AK-12 has been slated to eventually replace the Russian AK-74M, and last year it was announced that the Russian military was on track to receive 112,500 of the new Kalashnikov rifles by the end of this year. While it seems that as with other programs, this one is running a bit behind schedule—yet it does appear Moscow is actually moving forward.

The new assault weapon can be distinguished by its improved ergonomics compared to its AK-74M and AKM predecessors. The Russian Ministry of Defence has also highlighted the AK-12's increased accuracy, as well as the unique survivability of its barrel and the new production technology that went into making it.

Moreover, the AK-12 has been highlighted as a crucial part of the Ratnik “soldier of the future” combat outfit for Russian troops. This includes a new combat uniform that utilizes lightweight body armor designed to protect up to 90 percent of a soldier’s body, as well as a highly-integrated, wireless networked communication system that provides greater situational awareness and sharing of vital information and intelligence between each soldier and unit.