In the Fight Against Coronavirus in Africa, America Must Not Bail Out China 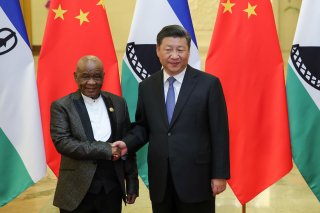 A humanitarian crisis, unprecedented in scale, is coming to the African continent. Africa faces perhaps its greatest challenge of the century: a balancing act between effectively managing public health and rebuilding devastated economies—all under the burden of already enormous debt.

According to the World Health Organization, coronavirus has only just begun to impact Africa, but insufficient testing and poor health infrastructure will likely hamper accurate data collection on the true scope of the crisis going forward. By any measure, it is clear that the pandemic will soon overwhelm already struggling health systems in many African countries.

In the midst of this crisis, most African nations are beginning to require unprecedented levels of increased public health spending. At the same time, many nations’ currencies have depreciated greatly due to a lack of export demand, threatening the fundamentals of their economies and greatly diminishing their finances. Wealthier African governments are beginning to enact unprecedented economic stimulus plans to counteract dire economic conditions.

As governments dip deeply into their reserves for all available resources, some are faced with a devastating reality: billions of dollars in high-interest debt to China. These debts come as a consequence of the acceptance of massive high-interest loans as part of China’s “One Belt One Road” initiative, which has loaned over $150 billion dollars to African nations since 2000.

China has been notoriously opaque with these details of these loans, and the true extent of the terms and debts owed is unknown. In what has often been called “debt-trap diplomacy,” China has been accused of extracting resources, power, and regional influence through these tantalizing loans to cash-strapped nations.

In oil-rich Angola, enormous debts to China—estimated to be in excess of $25 billion—have funneled oil to China in lieu of payment. China has a record of leveraging overwhelming loans to exploit local resources and infrastructure, often leaving the debtor nation with little of their own precious resources left. While this behavior occurs in many parts of the world, it is most widespread on the African continent, as China aggressively seeks oil and other strategic resources.

As the coronavirus pandemic has hit Africa, there has been global pressure on China to write off debts held by these nations, but so far, China has refused. Chinese media has called to reject the idea of writing off any debt, due to the precedent it would set. Nevertheless, countries like Uganda have called for the cancellation of all their debts to free up desperately needed funds.

When loan payments recently came due in several countries, and China refused to back down on debt relief, many African nations hoped that international support could provide desperately needed assistance and alleviate liquidity issues.

On March 27, President Donald Trump signed the $2 trillion CARES Act into law, making it the largest stimulus package in American history. The CARES Act’s reach extended far beyond U.S. borders by providing billions in overseas aid. The International Development Association was given an additional $3 billion in funding while the African Development Bank was given an additional $7.2 billion.

The International Development Association (IDA), a subsidiary of the World Bank, was established to provide some of the world’s poorest countries access to credit, regardless of their creditworthiness. In April, the IDA began a push towards widespread debt forgiveness, eventually culminating in pledged support for the G-20’s Debt Service Suspension Initiative.

The Debt Service Suspension Initiative’s critical flaw is that it lacks any effective tools to tackle the issue of Chinese debt. Calls for debt forgiveness amongst G-20 nations do not extend to Chinese state-owned banks, which may make up a majority of Africa’s debt to China.

Although China is also taking part in the agreement and “considering further bilateral support”, it is unlikely that any significant debt relief will occur. Ideally, if America forgives loans in the name of humanitarian relief, China should forgive its loans to those nations too, but this will almost certainly never occur.

Partial loan forgiveness represents enormous default risk for Chinese debts in Africa, a fact that the Chinese government is well aware of. China must come to terms with the fact that massive loans carry a risk for both parties involved, not just those who become hopelessly indebted.

Global cooperation during this crisis will be greatly hindered without demanding transparency and equitable debt forgiveness. Hidden debts and hidden penalties—whether denominated in finances, natural resources, or geopolitics—must be brought to light for a coordinated global effort at debt forgiveness in Africa to succeed.

America must not bail out highly indebted nations without first ensuring that its bailout will not be effectively transferred to China. Unfortunately, this level of oversight has proven to be non-existent in US-backed international bodies, as such a scenario occurred last year in Pakistan.

In 2019, Pakistan faced an economic crisis while it held over $62 billion in debt to China. Despite concerns, the disproportionally US-backed International Monetary Fund loaned $6 billion to Pakistan. The loan has been criticized for many reasons, one being that this loan merely perpetuated a cycle of indebtedness to China, without providing long-term sustainability.

Lack of debt transparency in Africa may cause such a scenario to play out dozens of times in the near future, with enormous consequences—including the loss of access to critical capital markets.

On a fundamental level, if western nations are willing to continuously bail out lower-income countries struggling with Chinese debt, then what incentive do those nations have to change their unsustainable borrowing habits?

In nations where corruption and unstable authoritarianism are the status quo of politics, how can long-term consequences be a motivating factor when determining the true risk of high-interest debts? These questions seem to be lost on international bodies, many of which are largely backed by stable democracies.

The global community’s path forward to help struggling African nations must be paved with vigilance and unity in shared objectives. The world must come together to prevent the Chinese exploitation of international financial aid. America must use its authority and global leadership to take the lead on ensuring this mission’s success.

Bryan Cosby is Score Reporting Project Assistant, at American Institutes for Research. He is also an economics contributor at Fourth View Media, where he writes about economics and geopolitics.