Fighting in Syria Has Made Russia's Military Better 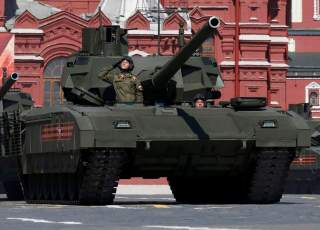 Key point: Moscow has used the war as a testing ground for weapons and to iron out the kinks in its military training.

Late last year, Vladimir Putin declared that Russia had accomplished its mission in Syria and would begin withdrawing its forces. However, in a situation reminiscent of U.S. experiences in Iraq and Afghanistan, Russia appears set to retain a military presence in the shattered country for the foreseeable future. This was the main theme of a recent panel at the Center for the National Interest (CFTNI) on “Russia’s Intervention in Syria”; not only has Russia become acclimated to being in Syria, it has also developed substantial equities there. The panel included Paul J. Saunders, Executive Director of CFTNI, Colonel Robert E. Hamilton (ret.), associate professor of Eurasian Studies at the U.S. Army War College, and Michael Kofman, senior research scientist at the Center for Naval Analyses. Gil Barndollar, Director of Middle East Studies at CFTNI, moderated the discussion.

Paul Saunders began the discussion by outlining Russia’s pre-intervention strategic objectives, which he said were to “prevent the fall of the Assad government” and to combat terrorism by fighting “them [terrorists] there” in Syria rather than in Russia. A “side benefit” for Moscow was seeking to try to force “the United States into some kind of political dialogue” in the aftermath of Russia’s isolation from the West following the Crimean annexation. “Of course, once Russia got into Syria in a significant way,” Saunders continued, “then, I think, the Russian government and the Russian military developed some additional interests there” including securing its greatly expanded military basing presence.

Saunders emphasized that achieving a stable political order in Syria will be extremely difficult for Syria, Russia and Iran without significant external financial assistance for reconstruction. He argued that Western governments are unlikely to provide aid to a regime led by Bashar al-Assad and that few if any other governments would be prepared to accept considerable financial responsibility regardless of who runs Syria. Therefore, he observed, the United States may have more leverage over Syria’s political future than is often assumed. Handling remaining foreign fighters will also be a major challenge as few if any governments will be eager to accept their repatriation, Saunders said.

Michael Kofman provided an overview of the military campaign in Syria. From the Russian perspective, he said “Syria is really broken up into three wars.” The first is the Assad regime’s “Reconquista campaign,” the second is “the existential conflict between Turkey and the Kurds,” and the third is “the open war of attrition between Israel and Iran.” Per Kofman, it is the latter conflict that is the most risky for Russia because it is “the war in the Middle East that they did not come to Syria for” as “there is a giant liability and mitigation risk.” An escalation in the Iran–Israel conflict would force Russia to break promises to either or both sides, and endanger its position as the only actor to enjoy decent relations with Iran and Israel.

Kofman also discussed the impact of the Syrian conflict on Russian military tactics and operational capabilities. He described Syria as “the principal transformative conflict for Russia today and the Russian military.” He noted that the conflict “is driving a great deal of experience and innovation, and for the Russian military it is the happy war” that has become the primary theater for Russian forces to attain operational combat experience. Approximately two-thirds of Russian tactical air assets have rotated through Syria. General officers, staff officers, and rank-and-file soldiers leave have gained valuable lessons on modern warfare and developed new ideas to implement in future conflicts.

Kofman observed that “tactics are driven by technology and the future,” and Russian tactical innovation was very limited before Moscow intervened in Syria. He compared the performance of tactical aircraft in Syria to the 2008 Russia–Georgia conflict as a “night and day transformation.” However, he cautioned, while Russia proved it can project military power like a great power, its efforts in Syria have been largely uncontested. Furthermore, the Russian armed forces have many organizational and technical issues to resolve. Russia’s military needs smaller munitions, longer range standoff munitions and more precision artillery. Moscow must also resolve inter-service rivalries to foster a cohesive joint warfare ethos. Nevertheless, these deficiencies have been revealed by the Russian military’s experience in Syria, proving the conflict to be a valuable learning experience. Kofman said “this is one of the many reasons why the Russian military actually likes Syria and wants to stay in Syria. They cannot get a real match up of their technology against the United States technology in this manner anywhere else.”

One area where Kofman differed slightly from Saunders is on Syria’s ability to extract external assistance for reconstruction. He suggested that Syria could possibly leverage the threat of large refugee flows to extract contributions for reconstruction from Germany and the European Union.

The first director of the U.S. Ground Deconfliction Cell with Russian forces in Syria in 2017, Col. Robert Hamilton (ret.) said that the impetus for the ground deconfliction process, not to be confused with air deconfliction ongoing since Russia’s intervention in the fall of 2015, stemmed from a “near miss” that occurred in June 2017, when the Russians gave the United States a 48-hour ultimatum to withdraw from the strategically critical Al-Tanf area. Al-Tanf, which sits on the tri-border with Jordan and Iraq, is an important node connecting Iran, through Iraq, with its Syrian allies. Hamilton described a hair-raising phone call between Russian and American generals. On the call, the Russian general accelerated the ultimatum timeline, implying that a strike was imminent. The U.S. commander retorted: “If you’re threatening my forces, this call is over because I have to hang up the phone and get on the line with my subordinate commander and tell him to prepare him to defend himself. So would you rather talk, or would you rather fight?” Fortunately, the Russian response was “let’s continue to talk about this,” and the two sides were able to defuse the situation.

Coalition management, an area in which Russia had little experience prior to Syria, has also posed a significant test, particularly given the disparate array of partners Moscow is working with. Hamilton observed that “Russia is now past the point where it can keep telling all of its partners what they want to hear without delivering.” The differing, sometimes conflicting, objectives of Russia’s partners in Syria pose challenges that are not easily resolved. For example, it is doubtful that Russia can support Iran’s vision for a Shia crescent stretching from Tehran to Beirut without provoking a conflict with Israel, and possibly, even the United States.

Hamilton addressed what he sees as the primary challenge for Russia in Syria, which is “how do you translate the destruction of your military adversary into the achievement of the political objectives that made the war worth fighting in the first place?” As with the U.S. experiences in Iraq or Afghanistan, there is no straight line between military success and desired political outcomes.

This first appeared in November 2018.