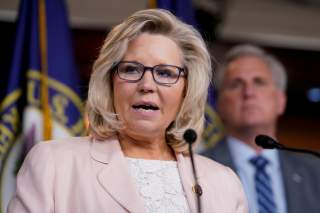 Socialism works in opposition to and destroys free societies.

That was the message Thursday as conservatives gathered near Washington for the annual Conservative Political Action Conference, or CPAC.

Organizers called the CPAC session “Socialism: Wrecker of Nations and Destroyer of Societies,” from a phrase used by President Donald Trump in a speech to the United Nations in 2019.

Cheney, whose post as GOP conference chairwoman makes her the No. 3 House Republican, warned of the rise of socialism in Congress and among Democrat leaders such as Sen. Bernie Sanders, I-Vt.

She referred to Sanders’ defense of literacy programs in communist Cubaduring a CNN town hall appearance in which the self-described democratic socialist said that “truth is truth.” The Vermont senator made similar remarks in a “60 Minutes” interview that aired Sunday.

“Today I have some truth for Bernie Sanders,” Cheney said.

She told the story of Enrique Padron, a Cuban man who fled the island nation through “shark-infested waters” to come to the United States in 1994, when he was 20.

Cheney said she asked Padron why he wanted to live in America and how he knew the country was for him.

“I knew because of Ronald Reagan,” Padron replied, she said.

Padron and his family listened to the 40th American president’s speeches on the radio with towels over their heads, so the neighbors couldn’t hear, Cheney said.

When Padron heard Reagan talk about freedom, he knew that the U.S. was where he wanted to be.

It is our charge as American to continue our inheritance of freedom, Cheney said.

“It is up to us to defend the blessings of freedom, and we will absolutely stand up and we will defeat those who advocate socialism. And we will ensure that our children and our grandchildren will live in the freedom that we do today,” Cheney said.

Rep. Roger Williams, R-Texas, spoke about the differences between capitalism and socialism.

“As a small business owner for 48 years, I represent something called Main Street America. You know who that is,” Williams said. “The implication of socialism for our business is alarming, and it is dangerous.”

What sets proponents of capitalism apart from socialists, he said, is that they “promote the ideas of individual responsibility and free enterprise.”

“Risks and rewards motivate capitalists because all we need is a hand up, as opposed to socialist liberals who want a hand out,” Williams said. “They see guarantees, we see opportunities.”

Williams said that Trump’s pro-growth agenda, which has cut government regulations, has been a boon to small businesses.

“Capitalism is the greatest force in the history of our world because it lifts people out of poverty, and we must instill this value in future generations to come. That is our job,” Williams said.

Mercedes Schlapp, a former White House director of strategic communications in the Trump administration, gave reasons that socialism must be stopped in America.

Schlapp, whose parents fled communist Cuba for the United States, explained how socialism can quickly destroy a country.

“We are not going to allow the socialism ideology to take over America,” she said. “We have to stop it in its tracks.”

America is the greatest country in the world, Schlapp said, but our freedoms are fragile. Socialism has destroyed country after country, she said, most recently Venezuela.

“You had one of the wealthiest nations in Latin America turn over their rights to these thugs, these dictators, Hugo Chavez and Nicolas Maduro, and they came in and took over the oil industry, nationalized it, basically destroyed their booming economy, and now 1 in 3 Venezuelans is suffering from starvation,” Schlapp said.

Schlapp said her parents, Jose and Maria Bianna, built a life in Cuba but their dreams were shattered when Fidel Castro’s communist regime seized power in 1959.

Because he opposed the government, Schlapp’s father was imprisoned and tortured, and watched friends be executed, Schlapp said.

Left-wing politicians in America continue to praise Castro, but nothing is great about the communist regime he created, she said.

Jarrett Stepman is a contributor to The Daily Signal and co-host of The Right Side of History podcast. Send an email to Jarrett. He is also the author of the new book, "The War on History: The Conspiracy to Rewrite America's Past."

His article first appeared in The Daily Signal on February 27.