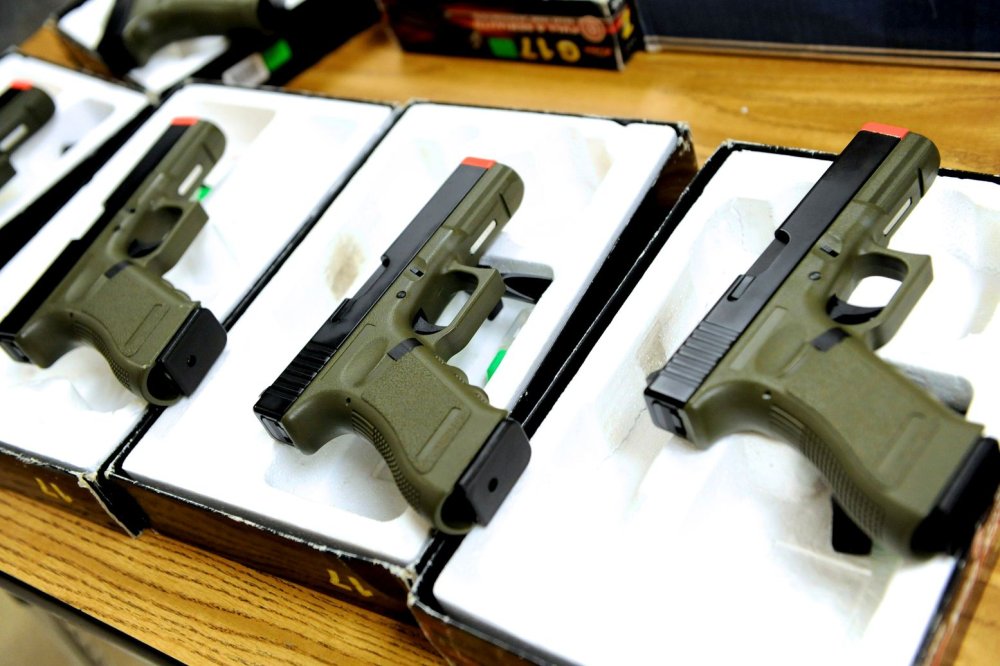 Key Point: The Glock 18 simply fires too many bullets, too quickly.

The Glock 18 is a full-sized automatic pistol with a 9mm chambering… only it’s capable of firing up to 1200 rounds a minute.

It’s a bit like the Glock 17, but has a switch to change between semi-auto and full-auto firing. This big difference is actually due to a very simple mechanic. A raised extra tab on the cross of the trigger connects with a metal piece that is lowered when the full-auto switch is flipped.

This allows the sear to remain engaged and you can continue firing over and over and over on the same trigger pull! The fact that the Glock 18 has fully automatic capabilities, while also being easy control, makes it easy to see how it can be effective as a sidearm.

A neat variation on the G18, the compensated 18C model, allows gas to escape and reduces muzzle climb with a ported barrel and cutouts in the slide.

History of the Glock 18

Originally, the Glock 18 was introduced as a select-fire 9mm for military and police use in 1986, and was originally designed at the request of an Austrian counter-terrorist unit. The main thing that visually separates the Glock 18 from its predecessor is the rotating, lever-type fire-control switch which is placed on left side of the slide towards the rear. Indented dots indicate the selected firing mode when the switch is in different positions. A single dot located above the switch indicate the semi-auto mode while dual dots below it indicate full-auto firing.

The compensated version, the Glock 18C, was introduced in 1996 in order to make firing more manageable. The 18C is basically a full-auto version of the Glock 17C pistol.

A compensator cut into the forward position of the slide was meant to assist in controlling the muzzle of the gun and prevent climbing. Four compensator slots, increasingly larger as they move from rear to front, are situated to vent gas upwards through a small keyhole shaped opening, which pushes the barrel downwards during full-auto bursts. Between the rear of the ejection port and the sight, the slide takes a rectangular pattern and is hollowed out.

The Glock 18 uses a modified Browning cam-lock system that was adapted from the Browning Hi-Power pistol.

It’s locking mechanism has a link-less, vertically tilted barrel with a rectangular breech that locks securely into the slide. While chamber pressure is high and dangerous, the barrel moves backward on the recoil stroke, locked tightly with the slide.

When the barrel pressure decreases to safer levels and the bullet has left the barrel, the barrel and slide unlock as a ramped lug extension at the base of the barrel and a tapered locking block which is integral to the frame act on each other, pushing the barrel downward. Referred to as a camming action, this stops the movment of the barrel while the slide continues to move backward from the force of the recoil, disengaging and finally ejecting the used cartridge casing.

The firing mechanism is also incredibly intricate and unique. Instead of utilizing the conventional hammer, the Glock is designed to use a striker. This striker firing mechanism involves using a spring-loaded firing pin with a dual-stage cocking system. The first position, half-cock, is set in place when the pistol is charged. Pulling the trigger then fully cocks the striker as the round is prepared to fire.

Glock refers to this pre-set trigger mechanism as the Safe Action trigger. If you were looking to use any major components from the Glock 18 in your other Glock models however, you’ll find that most of them are unique and not interchangeable.

The Glock 18 was put through SAR testing and evaluation, where hundreds and hundreds of 9mm hollow-point rouds with full metal jacketed cartridges from a wide variety of different manufacturers were fired and examined. The magazines in the testing were Glock factory 15 and 33-round magazines, Korean aftermarket magazines, and 100-round Beta G magazines that were manufactured in the USA. No malfunctions occured during testing.

Anyone unaccustomed to shooting machine pistols should only use the Glock 18 under supervision. The full-auto firing mode of the firearm can be handful even for experienced shooters. With a little experience and cultivated technique however, the Glock 18 can be efficiently used and mastered; becoming an effective, dangerous weapon at very close ranges when used by an experienced shooter.

The Glock 18 was tested with suppression as well, using a threaded barrel. The three suppressors that were utilized with the firearm were the SWR Trident 9, Octane 9, and a Gemtech Multimount. As it is difficult to obtain a Glock 18 barrel, a threaded replacement Glock 17 barrel was employed and fit without issue. While the gun managed perfectly when firing in semi-auto mode with the suppressor attached, if it was switched to full-auto it would still function as if in semit-auto mode. Even swapping the original spring out and introducing a lighter 15lb spring didn’t solve the issue. Eventually, the problem was solved by using a heavier 22lb Wolff spring. After this, the testing pistol functioned perfectly and quietly in full-auto mode.

One major disadvantage discovered in the Glock design is that the option of an integral laser sight pistol grip is unavailable unless attached with an obstructive add-on. Alternatively, the LaserMax sight, which is built into a guide rod/spring assembly, can be used to maintain a sleek and clean look for the firearm. However, with this sight the testing Glock 18 again developed the issue of not being able to fire full-auto while the suppressor and Lasermax recoil spring assembly were employed.

Now, the first thing you might be thinking when hearing about the Glock 18 for the first time is that it must be a wild gun to try and control. Incredibly, the gun is actually very easy to manage and stabilize. Having not fired the compensated Glock 18C model, it’s impossible to say exactly how much the version counteracts muzzle climb and increases control.

However, the original Glock 18 may be easier to control than you may have thought. Most likely, the polymer frame absorbs a great deal of the recoil during longer bursts of fire.

By keeping your aim towards the lower mid-point of a humanoid target, it can be easy to place three, or even four, round bursts on it with a bit of added leaning into the shots on your part.

Unfortunately, it’s almost impossible to buy the Clock 18 legally as a civilian.

Transferable: These are the guns registered before May 19, 1986. Many online forums continue to argue over these mythical guns’ existence, but if any do, it’s highly unlikely that you’ll find one available for sale. If you do manage to stumble across one of them though, you’ll likely have to fork up a luxury car amount of money just to purchase it.

Pre-Samples: You might be able to get one if it was imported between January 1, 1986 and May 19, 1986. Dealers will be the only ones who have these, as machine guns were seen as having no sporting purposes for civilians at the time. They were permitted to keep their models though after giving up their licenses. There are only a few, if any at all, of these, because the G18 was originally produced around this time.

Post-Samples: These are all of the guns made following the May 19, 1986 deadline. They’re reserved for dealers, manufacturers, military, and law enforcement only though, so any average firearm consumer will have trouble obtaining one. Class III dealer’s with a letter from a police department permitting testing of the gun will be able to sample one. Doing so will mean forfeitting your license though, which is a bummer. The good news? Class III dealers won’t need to bankrupt themselves to get a stab at them.

If you can imagine a Glock 17 with a fully automatic firing capability, then you’ve essentially imagined the Glock 18. This pistol may be difficult for civilians to buy under current Federal gun laws, but it’s still a neat gun to think about.