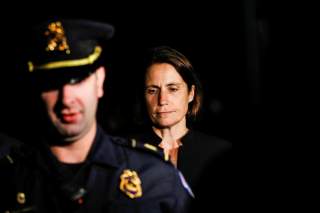 Fiona Hill, who served as the White House’s top adviser on Russia affairs until July, told lawmakers she was “shocked” to find out that Steele, a former MI6 officer, was the author of the dossier. That’s in large part because when she had met with Steele in the years leading up to his dossier work, he was “constantly try to drum up business.”

Hill, who was deposed in the impeachment inquiry on Oct. 14, said Steele’s eagerness to obtain work made him vulnerable to Russian disinformation.

“Because if you also think about it, the Russians would have an ax to grind against him given the job that he had previously. And if he started going back through his old contacts and asking about, that would be a perfect opportunity for people to feed some kind of misinformation,” said Hill, who was a scholar at the Brookings Institution until she joined the Trump administration.

Hill said she was not aware of the dossier until a colleague showed it to her day before BuzzFeed published it on Jan. 10, 2017.

When she read the report, Hill said she had “misgivings and concern that [Steele] could have been played.”

“I almost fell over when I discovered that he was doing this report,” Hill said of Steele, who she said she worked with from 2006 to 2009, when she served as a national intelligence officer.

Hill said she met most recently with Steele in 2016 and saw from those meetings that he “was clearly very interested in building up a client base.”

“And this is why I was concerned about the Steele report because that is a vulnerability,” said Hill.

“Christopher Steele going out and looking for information. He’s obviously out there soliciting information,” she added. “What a great opportunity to, basically, you know, present him with information that he’s looking for that can be couched some truth and some disinformation.”

The FBI relied heavily on information from Steele to obtain four surveillance warrants against former Trump campaign adviser Carter Page. Republicans have accused the FBI of improperly relying on the dossier, since its most explosive allegations are unverified. They have also accused the FBI of failing to tell surveillance court judges that the Democratic National Committee (DNC) and former Secretary of State Hillary Clinton’s campaign funded Steele’s work.

Fusion GPS, an opposition research firm that was on the DNC-Clinton payroll, hired Steele in June 2016.

Speculation about how Steele collected information for the dossier has gained steam since the release of the special counsel’s report, which undercut Steele’s main allegation of a “well-developed conspiracy of cooperation” between the Trump campaign and Kremlin.

Intelligence experts have told the Daily Caller News Foundation that they have long suspected that Steele was the victim of a Russian disinformation campaign. Attorney General William Barr testified on May 1 that he was “concerned” Russians snookered Steele and the FBI.

Michael Horowitz, the Justice Department inspector general, is expected to soon release a report of the FBI’s Russia investigation, including its handling of the dossier.

In one exchange, Hill agreed with GOP Ohio Rep. Jim Jordan’s assessment that the dossier was a “rabbit hole.”

“The way that the Russians operate is that they will use whatever conduit they can to put out information that is both real and credible but that also masks a great deal of disinformation,” she said, adding:

“It’s very likely that the Russians planted disinformation in and among other information that may have been truthful, because that’s exactly, again, the way that they operate. And I think everyone should always be cognizant of that.”

Steele, who operates a private intelligence firm in London, relied on sources and sub-sources he used from his days as an MI6 station chief operating in Moscow. Little is known about how Steele collected his information, which he laid out in a series of 17 memos published from June 20, 2016 to Dec. 13, 2016.

The most salacious allegation is that the Russian government had a blackmail videotape of Trump with prostitutes in a Moscow hotel room in 2013. Steele said his sources said the Kremlin was using the video as leverage over Trump.

There has been no evidence produced to date that the video exists or that Trump met with prostitutes during his Moscow trip. People who were with Trump during that visit have said he would have had very little time to carry out the alleged activities since he stayed overnight in Moscow for one night and was alone for only a few hours.

Hill also said she believed the dossier amount to an attack on Trump.

“The point that actually hasn’t come out and, again, why I’ve been very cross in the media, is that the president was attacked as well, because the Russians sought to discredit him,” she said.

“There’s been a cloud over President Trump since the beginning of his presidency, and I think that’s exactly what the Russians intended,” she said later.

Hill said she did not have knowledge of the dossier until a day before BuzzFeed published the explosive document on Jan. 10, 2017. She said a colleague showed her a copy of the report, which she said had been floating around Washington, D.C., for weeks.

“I was shocked,” said Hill of her response to the dossier.

Hill also said she believed it was inappropriate for Steele or any foreign national to have been hired to dig up dirt on U.S. politicians.

“And, again, I think I already expressed my shock and surprise when I learned that he had been involved in this,” she said.

Hill also discussed a widely reported meeting that Steele had at the State Department on Oct. 11, 2016 with Kathleen Kavalec, the deputy assistant secretary of European and Eurasian affairs.

Kavalec met with Steele upon the request of Jonathan Winer, who served as special envoy to Libya as well as Steele’s conduit to the State Department.

Hill said she would have not met with Steele if she had been in Kavalec’s position. But she also said that Kavalec told her that “she’d been instructed to go and talk to [Steele].”

The emails show that in 2014 and 2015, Winer set up meetings for Steele and executives at APCO Worldwide, an international consulting firm where Winer worked before and after his latest State Department stint.

“He was constantly trying to drum up business, and he had contacted me because he wanted to see if I could give him a contact to some other individual, who actually I don’t even recall now, who he could approach about some business issues,” Hill said of Steele.