Fire! The Latest Weapons Additions to the F-35 Are Pretty Amazing 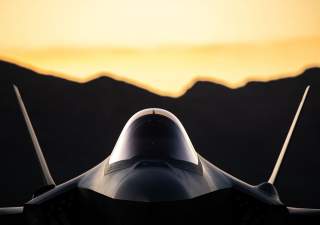 Key Point: This 5th generation fighter is still trying to attach every weapon it can hold.

The GAU-22 Gun System, Small Diameter Bomb II and GBU-38/54 are all scheduled for additional ground and flight tests later this year, Brandi Schiff, an official with the F-35 II Joint Program Office, told Warrior in a written statement.

The weapons, now in development for several years, will build upon the existing arsenal of air-to-air and air-to-ground weapons now operating on the F-35. Current production F-35s are certified to carry Paveway IV, GBU-12 and GBU-49 laser guided bombs, Schiff said.

The Navy's now-operational F-35C is preparing for its first deployment. Strike Fighter Squadron 147 (VFA-147), also known as the “Argonauts” based at Naval Air Station Lemoore in California, is scheduled to be the first USN F-35C squadron to make an operational deployment, Schiff said.

The Air Force’s F-35 testing, software development and integration for these new weapons are a key part of an upcoming Block 4 variant of the F-35 Joint Strike Fighter, an emerging software upgrade intended to give the multi-role fighter a new dimension of attack mission possibilities, service leaders said. The Block 4 program brings additional weapons to the F-35, including GBU-53 Small Diameter Bomb and GBU-54 Laser Joint Direct Attack Munition.

The Block 4 initiative is part of a long range trajectory planned for the F-35 described by Pentagon developers as C2D2 - Continuous Capability Development and Delivery. The idea, officials say, is to position the multi-role fighter such that it can consistently accommodate new weapons, stealth materials, sensors and guidance technology as they become available.

The weapons integration is consistent with a current Air Force strategy to expedite software upgrades to the aircraft by keeping pace with current technological change. Instead of relying upon pre-determined increments to be added at fixed points in time often several years apart, F-35 developers see the need for consistent short term integration of software improvements as they emerge.

The weapon, formally called StormBreaker, has completed its operational drop testing and is now moving toward integration, a Raytheon statement said.

​Imagining infrared guidance allows the weapon to track and hone in on heat signatures such as the temperature of an enemy vehicle. With semi-active laser technology, the weapon can be guided to an exact point using a laser designator or laser illuminator coming from the air or the ground, Raytheon officials told Warrior.

Kris Osborn, Managing Editor of WARRIORMAVEN (CLICK HERE) can be reached at [email protected]. This piece was originally featured in August 2019 and is being republished due to reader's interest.