Fire: The Next Great Terrorist Weapon of Choice? 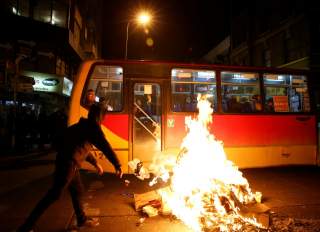 Palestinian militants launched a barrage of balloons carrying incendiary devices that set alight crop fields and grasslands in southern Israel on May 22. Just one of the devices destroyed 12 acres of wheat in Kibbutz Alumim, about 2 miles southeast of the Gaza Strip. The attack followed reports that Hamas and the Israeli government had reached a six-month cease-fire agreement, in which Hamas had pledged to halt airborne arson attacks using kites and balloons.

On May 12, arson heavily damaged the Diyanet Mosque in New Haven, Connecticut, during the Muslim holy month of Ramadan. In another recent attack on a house of worship, two attempts were made May 18 to set fire to the Anshe Sholom B'nai Israel synagogue in Chicago's Lakeview neighborhood. The remains of several Molotov cocktails were found outside the building. Motives for these arsons have yet to be determined.

Regardless of their ideology, terrorists will use the tools at their disposal to create fear and media coverage. In hostile environments, they have far less operational space to plan and execute their attacks. Counterterrorism measures have made it difficult for would-be terrorists in some places to acquire the weapons they need for a bombing attack or even an armed assault. Because of this, Stratfor's Threat Lens team has identified the emergence of a style of terrorism in hostile environments that consists of lone attackers or small cells conducting simple attacks using readily available weapons. Arson is one such simple attack method.

In the process of researching this column, I encountered a report from the BBC Monitoring service discussing how the May 23 edition of the Islamic State's al-Naba weekly news publication contained an article that took claim for the arsons in Iraq and Syria and inciting followers to "roll up their sleeves" and use arson as a weapon. The author of the article added that there are plenty of agricultural fields, orchards, houses and "economic infrastructure" for them to target in Iraq and Syria.

The confluence of these events encourages thought about fire as a weapon. The last time I wrote on this topic, I focused primarily on some of the history of the tactic as well as the different types of targets it has been used against. This time, I focus more on the advantages and disadvantages of fire as a weapon, as well as some new trends I see in motion.

One of the main advantages of using fire as a weapon is its ready availability. A friend who is a retired Bureau of Alcohol, Tobacco, Firearms and Explosives arson investigator used to say that the most accomplished financially motivated arsonists don't bring anything with them to a target other than a lighter. They work to make the fire look as if it were an accident caused by an understandable source such as a candle next to a curtain, a kitchen appliance or an overloaded electrical outlet. Because of this, they attempt to use existing fuel sources instead of bringing in accelerants, which are a sure indication of an arson. Any indication of malicious intent is likely to interfere with the insurance payout most financially motivated arsonists seek.

Of course, terrorists want the opposite: Far from hiding that arson caused the fire, they want their actions to be blatant. Terrorism is the propaganda of the deed, and a person conducting an arson with a terrorist motive is doing so specifically to generate fear and terror, not just to cause physical damage and make some money. Because of this, even an attack that does not cause significant damage can be considered a success as long as it causes fear and generates media attention. But also because of this, people conducting a terrorist arson can be far more overt and obvious in their techniques than financially motivated arsonists. The same holds true for a person conducting an arson because the target ignored an extortion demand. They can use very simple and obvious tactics such as employing jerrycans of gasoline, Molotov cocktails or even an incendiary compound such as thermite in their attacks.

I've written in the past about the challenges associated with being a bombmaker in a hostile environment and how it can be difficult to construct bomb components and explosive mixtures from scratch. These difficulties, however, do not apply to arson. Gasoline, diesel and other accelerants are readily available, are inexpensive, and there is no sort of special permit required to obtain them so buying them does not raise any suspicion like the purchase of many explosive precursor chemicals can. Even the polystyrene or soap flakes needed to manufacture simple napalm are cheap and easy to obtain.

The materials to conduct an arson attack can be obtained in areas where it is difficult to obtain firearms, and can be acquired by felons not allowed to own a firearm. Even the aluminum powder and iron oxide required to manufacture a more advanced incendiary compound such as thermite can be easily obtained or even produced at home to increase operational security. Because of these factors, the weapons acquisition phase of the terrorist attack cycle for an arson attack is far cheaper and easier, and draws less potential scrutiny than acquiring the weapons for a bombing or firearms attack.

Finally, arsonists can attack a wide array of targets, from buildings and vehicles to forests and crop fields, and it is impossible to protect them all.

One of the disadvantages of arson is that a fire can be put out before it causes much damage if people are around. Because of this, many arson attacks are conducted at night or in remote places. This happened in March 2019 when the man later arrested for conducting an armed assault against a synagogue in Poway, California, attempted to torch the Dar-ul-Arqam mosque in Escondido, California. That attempt was thwarted when people sleeping in the building were awakened by the noise and smell of the burning accelerant, and were able to put the blaze out with fire extinguishers before the fire department could even arrive.

In some cases, investigators may need significant time to determine that an incident is an arson, and this lag also tends to attenuate the fear and shock of an arson attack.

Moreover, while the materials needed to conduct an arson attack are readily available, using them in a way that causes significant damage can be difficult, and can take some practice to perfect. For example, I can recall seeing many Molotov attacks in which the bottles containing the accelerant did not fracture, but rather bounced harmlessly off the target while the wicks simply burned out. I also have seen other arson attacks where the accelerant burned and scorched the outside wall of a target, but did not set the structure alight and the fire went out once the accelerant was consumed.

That said, due to the current environment with increasing right-wing nationalist and white supremacist violence, a resurgence in environmental protest and action, and a persistent grassroots jihadist threat, I believe that we are also going to see an increase in arson as a terrorist weapon.

And this brings me back to the Islamic State's remotely activated igniter based on a cellphone. The principles behind the device have been used for a long time to initiate bombs, but someone has now gotten creative and adapted these devices to light fires by adding a longer bridgewire. I am concerned that now this device is out in the wild, we will see it used beyond Iraq and Syria to light fires. Both al Qaeda and the Islamic State have encouraged jihadists to conduct terrorism by arson, and the ninth edition of Inspire magazine even contained instructions for how to make a timed incendiary device.

I expect to see instructions for constructing these simple Islamic State devices shared on the internet in the near future, and this will allow the design to migrate outside of the Islamic State core area. Like other techniques, this device can be constructed by militants of any ideological persuasion. So I believe some of the increasing number of arson attacks will involve the use of these initiators.