Fire! Is This the World's Best Close Quarters Rifle? 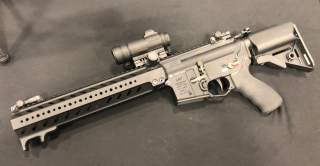 Key point: LMT describes the CSW as an ideal rifle for close-quarters battle, due to its compact dimensions, powerful subsonic .300 Blackout chambering, and shrouded suppressor.

Charlie Gao studied Political and Computer Science at Grinnell College and is a frequent commentator on defense and national security issues. This first appeared earlier this month.