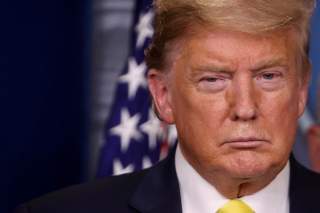 The president of the United States was speaking to the nation live, on television, from the Oval Office. His topic was the new coronavirus, and his mission was clear.

“This is the most aggressive and comprehensive effort to confront a foreign virus in modern history,” he assured the American citizenry, “and we are responding with great speed and professionalism.”

Yet, when the brief address was over, his aides needed to quickly clarify what he had said because it failed to align with the reality of the policies his administration planned to take. And the following morning, stock trading was halted 38 minutes into the daily session when the Dow Jones Industrial Average fell 7%, demonstrating that the financial markets he sought to calm remained troubled by his leadership.

In other words: President Donald Trump’s March 11 speech failed to fulfill the most important goals of a live, prime-time broadcast address from the White House.

Since Franklin D. Roosevelt offered his first “fireside chat” 87 years ago today, using broadcasting to calm the nation in times of duress has proven to be one of the most potent tools of the presidency.

But these addresses need to closely hew to the blueprint Roosevelt invented in order to be deemed successful.

President Donald Trump is seen through a window in the Oval Office as he addresses the nation on the response to the COVID-19 coronavirus, on March 11, 2020. Getty/Mark Wilson

President Franklin D. Roosevelt and his advisers knew he had to do something.

The U.S. banking system faced imminent collapse; depositors around the country waited anxiously in line to withdraw their funds. To stop the run, on March 6, 1933, the entire banking system was shuttered. Three days later, Congress passed the Emergency Banking Act.

By March 12, with the banks ready to reopen, nobody knew what was about to happen. The nation required both information and assurance.

So at 10 p.m. Eastern time, Roosevelt began his first “fireside chat,” to explain – in clear and accessible terms – precisely what had just occurred, and what was going to happen beginning the next day.

That live address from the White House to an estimated 60 million listeners across the United States proved broadcasting’s power as nothing before or since. As a scholar of radio history, I’ve analyzed how that first fireside chat inspired both social psychologists and commercial advertisers to investigate the influential power of broadcasting.

Roosevelt’s address 87 years ago provided the model future presidents would use to inform the American citizenry, calm national anxieties and establish the crucial importance of a moment in time.

The live, prime-time address from the Oval Office became a staple of White House communication.

The first president to speak through the new medium of radio was Warren G. Harding, who offered a few words in a brief public ceremony on June 14, 1922.

But for Harding, and successors Calvin Coolidge and Herbert Hoover, radio broadcasting – and the national communication it offered – was never considered an essential tool of governance. None of the three Republicans used this new medium of mass communication effectively.

In New York state, however, the Democratic governor – Franklin D. Roosevelt – had begun using the state’s small radio network to promote his agenda directly to citizens.

He delivered a series of radio addresses in 1929 and 1930 to counter the intransigence of the state legislature’s Republican majority. His advisers noted both Roosevelt’s natural talent and radio’s remarkable effectiveness in reaching voters directly. The governor could bypass not only his opposition in the legislature, but also the Republican newspapers editorializing against his policies.

Roosevelt and his advisers brought this awareness to Washington after he won the presidential election.

Following his March 4, 1933, inauguration during the Great Depression, the Roosevelt administration had to address the cascading series of dire crises facing the nation.

The banking crisis proved most threatening. At first it appeared to be yet another economic panic of the sort that had occasionally bedeviled the U.S. financial system.

Depositors gathered outside of the Guardian Trust Company and National City Bank after the withdrawals were limited to 5% of deposits, Cleveland, Ohio, Feb. 28, 1933. Getty/PhotoQuest

It soon became obvious that the 1932-1933 crisis was potentially more catastrophic than any earlier panic. Aside from legislation, something less formal but perhaps more important was required: reassuring the American people about the safety of their economic system.

Thus, the informal and informative radio address style that Roosevelt pioneered in Albany was rolled out on the national stage.

“I want to talk for a few minutes with the people of the United States about banking,” he began on that Sunday evening.

The address was notable for its stylistic clarity and the way it combined an authoritative discussion of banking with a neighborly, even friendly, tone.

“You people must have faith; you must not be stampeded by rumors or guesses,” he told an estimated 60 million listeners.

“Let us unite in banishing fear. We have provided the machinery to restore our financial system; it is up to you to support and make it work. It is your problem no less than it is mine. Together we cannot fail.”

It worked. It so calmed the nation while slowing (and eventually ending) the bank run that it established the model for all ensuing fireside chats over the next 12 years. Every succeeding president eventually followed the basic Roosevelt model.

The live, prime-time national address from the White House represents a unique opportunity for a presidency. If mishandled or improperly employed, it can backfire.

Among those that didn’t work out: Lyndon B. Johnson surprised the country and much of his Democratic constituency by announcing his refusal to run for reelection in 1968. President Jimmy Carter addressed what he considered a “crisis of confidence” in the United States in 1979. That speech remains tarnished by a word Carter never actually uttered – it was labeled the “malaise” speech – and it warned future presidents about the format’s rhetorical limits.

Yet these bad examples do not overshadow the numerous other historical moments when the nation experienced direct presidential addresses via broadcasting.

From President Harry Truman’s addresses announcing the surrenders of Germany and Japan in 1945 to President Barack Obama declaring the capture and execution of Osama bin Laden in 2011, the American people were given important and historic information direct from the White House through the same basic framework that Roosevelt pioneered 87 years ago.

The coronavirus and an anxious public

The first is to designate the subject under discussion as historically significant and worthy of the format. The second is to inform the citizenry in order to persuade people to believe or act in specific ways. The third is to reassure the nation.

Underlying those objectives: To establish confidence in presidential authority, which, by itself, should reassure.

Surrounded by members of the White House Coronavirus Task Force, U.S. President Donald Trump leaves the stage after speaking and taking no questions at the White House March 9, 2020. Getty/Drew Angerer

In the current public health crisis facing the United States, the White House has preferred a different mass communication approach. President Trump has briefly and hastily addressed the media from a podium, but turned over much of his time to his coronavirus response team. He held a photo and video opportunity with government scientists at the Centers for Disease Control and Prevention in Atlanta. And he continues to tweet.

None of these communication strategies was equal to the moment. So the White House finally decided to try the live address to the nation.

But without respecting it as a structured format, the address failed to achieve its mission of clearly informing, and calming, the anxious nation.

While social media seemingly spreads and inflames our national anxiety, television offered the Trump administration a valuable opportunity to seize the moment and ameliorate a national problem.

Yet, like the earlier presidential administrations that approached the format without the care and practice of the Roosevelt administration, the whole exercise only exacerbated the problem it was ostensibly employed to fix.