Firing a Bad Federal Employee May Get a Little Easier 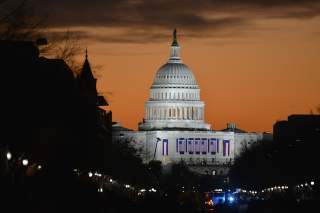 Holding federal employees accountable is essentially impossible. They have the highest job security of any sector of the economy. In fact, out of a federal non-military workforce of 2.1 million, only 11,046 persons—or 0.5 percent—were fired in 2017.

One reason for this is the cumbersome process managers must endure to fire a single employee. Multiple appeals involving as many as four separate agencies, as well as union representatives, are not uncommon. This process can last years even in the most cut-and-dry cases.

But two bills moving through Congress now would make it much easier for federal managers to take action when an employee is simply not getting the job done. The Modern Employment Reform, Improvement, and Transformation (MERIT) Act and the Merit Systems Protection Board (MSPB) Reauthorization Act would strip away several layers of red tape that insulate federal employees from accountability.

How 2 Bills Would Fix the Problem

The process for firing a federal employee is laden with speed bumps and roadblocks.

One of the most time-consuming requirements a federal manager with a problem employee faces is developing a performance improvement plan, which is meant give the employee one last chance to correct his or her behavior.

It rarely has the desired effect. Only 35 percent of federal managers believe “poor performers make a serious effort to use the performance improvement period to improve their performance.” The MERIT Act cuts this requirement.

The performance improvement plan requirement is just one of many built-in delays that slow down any disciplinary actions to a crawl. Today, employees must be notified 30 days in advance of a suspension, demotion, or termination.

The MERIT Act would cut that time in half. Currently, employees have 30 days to appeal an adverse action to the Merit Systems Protection Board. The new deadline would be 10 days.

In the federal government, firing an employee is the easy part. Keeping them fired is where things get difficult. Federal employees can appeal any serious disciplinary action to two different agencies (the Merit Systems Protection Board and the Equal Employment Opportunity Commission), enlist the legal expertise of a third agency (the Office of Special Counsel), and, of course, involve their union representative.

The MSPB Reauthorization Act would clear some of the land mines from this procedural battlefield.

For starters, the MERIT Act would sideline federal employees’ unions. The bill would prohibit employees fired for misconduct, or let go due to downsizing (referred to as a “reduction in force” in the federal government), from making a union grievance.

Employees would still be able to appeal adverse actions to the Merit Systems Protection Board, but if the MSPB Reauthorization Act passes, they would need to meet a higher evidentiary standard to win.

Under the terms of the MSPB Reauthorization Act, the Merit Systems Protection Board would not be able to second-guess the severity of the punishment an agency takes against an employee.

Today, even if an employee is clearly guilty of misconduct or chronic poor performance, the Merit Systems Protection Board can overturn a punishment it finds to be too harsh given an employee’s past performance, punishments doled out for similar offenses, or extenuating circumstances that help explain an employee’s behavior.

Under the new law, the Merit Systems Protection Board would no longer have this discretion.

The MERIT Act would also make it much easier to get rid of new employees when agencies make a bad hire. The bill would lengthen the probationary period for new hires from one year to two for most federal employees. During this period, an employee can essentially be fired at will and cannot appeal a demotion, suspension, or firing.

The Hidden Cost of the Status Quo

The cost of unaddressed misconduct and poor performance is hard to calculate. Not only do bad employees draw a paycheck, but permit applications fall through the cracks, welfare fraud goes undetected, and government projects run over budget because of employee negligence. All of that creates a drag on the economy.

Not only do American people deserve better, but so do diligent and competent public servants. Good workers do not want to be dragged down or asked to pick up the slack for bad employees. In fact, when President Donald Trump recently issued three executive orders that made it easier to fire poorly performing government employees, a majority of public-sector workers were on board.

Don’t be surprised if good public-sector employees are the catalysts for the sort of reforms members of Congress are attempting to implement.

John W. York, Ph.D., is a policy analyst in the B. Kenneth Simon Center for Principles and Politics at The Heritage Foundation.