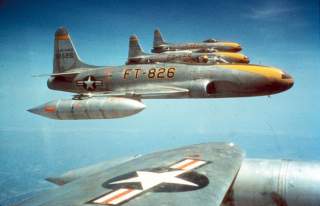 Although serving pre-war as the USAF’s first successful jet fighter interceptor, the F-80 actually made a name for itself in combat as a fighter-bomber in the Korean War. Indeed, during the first four months of the conflict, F-80Cs bore the brunt of the fighting against a numerically superior communist force by flying more than 15,000 sorties. A Shooting Star also shot down the first MiG-15 to fall to the USAF in the world’s first jet-versus-jet combat.

AS told by Warren Thompson in his book F-80 Shooting Star Units of the Korean War, the first sightings of Russian-built MiG-15s south of the Yalu River in early November 1950 changed the freedom with which the F-80s overflew North Korea. The first knowledge the USAF had of the existence of the superlative communist fighter came via blurred imagery caught on F-51 gun camera film in late October. The communist fighters were aircraft of the Soviet 29th Fighter Aviation Regiment, which had secretly deployed 40 MiG-15s from Kubinka, near Moscow, to China as early as March 1950. It had subsequently been joined by the 151st Aviation Division to form the 64th Fighter Aviation Corps. By November, the MiG regiments were ready for combat.

After initially engaging F-51s, the Soviet pilots claimed that they intercepted ten F-80s on Nov. 1 and shot one of them down. The USAF list two Shooting Stars losses for that date, with a 51st FIG jet falling to AAA during a morning strike on Sinuiju airfield and the second F-80 (from the 49th FBG) having also been downed by ground fire during a rocket attack near Unsan. There is no mention in the records of any interception by MiG-15s, however.

It quickly became obvious to the Far East Air Force (FEAF) that the MiG-15 posed a serious threat to the UN’s continued air supremacy in-theatre, so the decision was made to post the F-86A Sabre-equipped 4th FIG to Korea. The plan was for the very latest USAF jet fighter to counter its Soviet counterpart, while F-80s and F-51s continued to pound targets on the ground. However, the Sabres would not arrive in Korea until mid-December, and it was inevitable that Shooting Stars would clash with MiG-15s again well before then. In fact, the two types fought each other as early as Nov. 8, 1950.

On this day, four F-80s from the 16th FIS targeted AAA sites around the airfield at Sinuiju, where previous flights had reported several `Yak-type’ fighters in the area several hours earlier. The senior pilot in the flight was the 16th’s CO, Lt Col Evans G Stephens, and on his wing was 1Lt Russell J Brown. The latter was on his first mission ‘up on the river’ (he was on temporary duty with the 16th FIS from the Okinawa-based 26th FIS), and it was his element that felt the brunt of the attack from the MiG-15s. The following account draws on the experiences of both Lt Col Stephens and 1Lt Brown. The unit CO remembers;

`It was a beautiful day, and after we had successfully delivered our bombs on target, we took up a heading to the southeast in a low-angle climb to gain distance and altitude. As flight leader, I used 97 per cent power so as to allow the rest of my flight to join up after their strafing passes.

`At this time, while doing our best to avoid the AAA coming up at us from Manchuria, I heard some radio chatter from another flight that stated there were numerous aircraft taking off from Antung airfield and heading south across the river — I started a shallow turn to the left for a better view in that direction. I would guess that we were about miles south of the Yalu, and the Nos 3 and 4 aircraft in my flight were about a quarter-mile behind us. 1Lt Brown, my wingman, was about 100 yards away at my “four o’clock”.

`Shortly thereafter the AAA stopped and I spotted 12 MiG-15s at about 2500 ft below us — four off to the left of us, four to the right and four behind us. As flight leader, I began edging to the right to try and get beneath that flight of four MiGs, thus reducing the odds a little. We were flying in a northwesterly direction at this time.’

1Lt Brown vividly remembers that when Lt Col Stephens called out that there were 12 MiGs north of the river, they were showing no sign of turning to the south;

`As a matter of fact, they were doing loops and barrel rolls! I thought to myself that this has got to be a crazy war when the enemy can practice stunt flying right in front of you! Suddenly, all hell broke loose. Lt Col Stephens shouted for me to break left. An instant later two flashing silver aircraft dove at me out of the sun. As they swept by, I opened the throttle and tacked onto the tail of one of them, trying to manoeuvre into a firing position. As I tried to close on the enemy fighter, my F-80 started buffeting badly because I was exceeding 0.80 Mach. These were definitely MiGs, and I got a clear look at the communist jet as we bottomed out and it started a very fast climb back up into the sun. The aircraft had no distinguishing markings — just polished aluminum, swept wings and plenty fast!’

`As the lead MiG passed me, I could see a red star on the side of the fuselage. By the time I could get a good pursuit curve on the lead, he was at least 1500 ft out, and moving away. I held a long burst on him and saw some debris come off of his left wing. At that time, he turned sharply and headed for the safety of the Yalu. I rolled to the left and caught a glimpse of a lone F-80 in a steep dive about 3500 ft below me. He was pursuing what appeared to be a MiG, and their rate of speed appeared to be at the “Max”. Out of pure instinct, I looked for the rest of my flight, and also to see if any MiGs were at my “six o’clock”. I did not see any enemy activity in the immediate area except the one F-80 chasing the MiG.’

1Lt Brown, who was flying the F-80 spotted by Lt Col Stephens chasing the MiG-15 in a steep dive at high speed, opened fire on his opponent;

`When the MiG ahead of me broke to the left, he made a fatal mistake. There was little doubt that he could climb faster than me, but when he turned, I cut him off and got in four good short bursts with my guns. It was difficult to tell if I had hit him for he just rolled over and headed for the deck in a steep dive. I racked my F-80 around and followed him down. My airspeed was indicating over 600 mph, but I could not close the gap! At this time, he was about 1000 ft away when I gave him another four bursts. Black smoke poured from the right side of his fuselage. I knew it was now or never, so I squeezed off one long burst. Orange flames licked back over his fuselage and, suddenly, the entire MiG exploded in mid-air. After that I don’t remember what happened, as I was too busy trying to pull out of my high-speed dive.’

This all-jet dogfight had lasted only a minute, yet it created a sensation with the US press corps in-theatre. Unknown to everyone at the time, it was only a portent of things to come. The MiG-15 pilots continued to grow in confidence, fully aware that their most dangerous adversaries then in-theatre were flying inferior straight-winged F-80s and F9F Panthers.