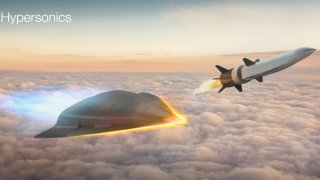 There were indications throughout the last week that the Air Force was readying its first-ever test of a hypersonic missile. On Tuesday, the test took place- and the Air Force announced that it has failed.

Per CNN, which cited the Air Force, the test took place Tuesday morning at Edwards Air Force Base in California, with the missile failing to take off from the B-52H Stratofortress bomber.

“B-52H Stratofortress took off Monday over the Point Mugu Sea Range intending to fire the first booster test vehicle for the AGM-183A Air-launched Rapid Response Weapon (ARRW) program. Instead, the test missile was not able to complete its launch sequence and was safely retained on the aircraft which returned to Edwards AFB,”  the Air Force said in a statement Tuesday. The test was supposed to be the first time the ARRW fired its booster vehicle and flew on its own, per Air Force magazine.

“The ARRW program has been pushing boundaries since its inception and taking calculated risks to move this important capability forward. While not launching was disappointing, the recent test provided invaluable information to learn from and continue ahead. This is why we test,” Brig. Gen. Heath Collins, the armament directorate program’s executive officer said in the release.

“Honestly, I think it’s stupid,” Ray said on a recent podcast. “I just think it’s a stupid idea to go and invest that kind of money that recreates something that the service has mastered and that we’re doing already right now.”

The War Zone also said that while the failure of the launch is embarrassing for the Air Force, it is likely to collect data and knowledge from what happened with the failure.

The Air Force had said in March that it was getting ready for the first test of a hypersonic missile, with FAA alerts last week indicating that the relevant aircraft had arrived in California and that Notices to Airmen alerts had been issued putting restrictions in place consistent with such a launch.

In addition to those missiles, the Pentagon is also looking to engineer self-guiding hypersonic weapons. And Russia is also believed to have tested hypersonic missiles of their own, as has China.

The Air Force, per CNN, is ultimately looking to “develop a hypersonic missile that can travel at 20 times the speed of sound in a real-world military strike,” and that some components have tested at speeds close to that.