First of Its Kind: The Extended Range Cannon Artillery Will Change Ground Warfare 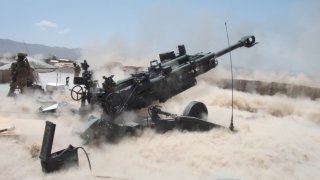 The U.S. Army’s Extended Range Cannon Artillery program (ERCA) stands to be a true gamechanger. The Army plans for the new weapon system to offer a variety of new capabilities to warfighters, including hitting enemy air defenses from stand-off ranges beyond the range of enemy fire; targeting troop formations and mechanized units before they engage U.S. forces; and sending precision guided, maneuverable rounds more than twice the distance of traditional weapons at enemy targets.

The ERCA program, which offers breakthrough levels of precision, range, and guidance in comparison to traditional 155mm artillery is now being prepared for a year long operational assessment.

“We've got six prototypes. Right now, we'll have eighteen ready by the end of next fiscal year for delivery to a battalion at Fort Bliss, Texas,  where we'll go into a one year operational assessment,”  Maj. Gen. John Rafferty, director of the Long Range Precision Fires Cross Functional Team at U.S. Army Futures Command, told The National Interest in an interview.

For decades now, 155mm artillery has operated at a maximum range of roughly 30km. ERCA stands to revolutionize this capability by offering a cannon that can fire rounds farther than 70km.

Rafferty explained some of the engineering and innovative work that went into architecting a breakthrough weapon of this kind.

“We’re putting a new turret with an upgraded armament system on that chassis. We pull out the 39-caliber gun and put in a 58-caliber gun. That basically takes a gun tube that is 20-feet long and changes it to 30-feet long,” Rafferty said.

The fundamental innovation, Rafferty explained, involves replacing the breech with a sliding block breech which is more like a tank breech.

“It’s a big, fixed, very robust metal brace which is a lot more like a tank breach. It seals the back end of the cannon in the chamber with a sliding lock breach. That larger chamber gives us the ability to develop a supercharged propellant. The different propellant generates much more chamber pressure and pushes the projectiles out with much greater velocity. That’s how we can achieve longer ranges,” Rafferty explained.

The development is quite tactically significant given the emerging threats facing the United States from Russia and China. In 2007, the U.S. Army was well ahead of the rest of the world when it unveiled its land-fired, GPS-guided precision artillery. However, guided artillery are now in deployment around the world, including among the militaries of U.S. adversaries. Consequently, an ability to outrange enemy firepower with the prospect of both precision and course-correcting guidance technology, changes the tactical landscape for ground war commanders.

“The howitzers are being produced by the Army’s organic industrial base. This is a really big Army success story here that we're building on with the M109. That's the upgraded chassis that's being produced right up the road here from Fort Sill and Elgin by big systems,” Rafferty said.