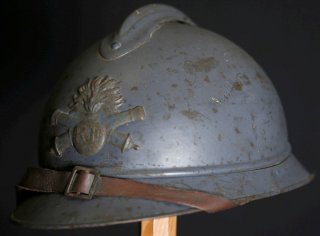 Even before World War I entered its second year the soldiers on both sides of the line were forced to dig in, and this resulted in the horrors that were to be trench war. A quick victory was a distant memory for both sides, and rapid movement and flanking maneuvers were but a dream. Artillery barrages rained down and as a result head wounds were commonplace; the French Kepis did little to protect the wearer. But until World War I helmets worn by the French army served a ceremonial use and were a mere accouterment of military uniforms of the day. The horrors of trench warfare in Europe changed all that as ghastly head wounds convinced planners that protective headgear was required.

This in turn has created a now somewhat infamous story of the development and evolution of the first helmets. According to an oft-repeated legend, it was sometime during the early days of World War I when French that military planners encountered a wounded Poilu, who had miraculously survived what surely would have been a lethal head wound because he was wearing a metal food bowl on his head. As the story goes, Gen. August-Louis Adrian encountered that wounded French soldier and was suddenly inspired to create a helmet.

Brilliant read, but it is dubious at best. At the opening stages of World War I the French Cavalry were still using steel helmets—both on parade and in the field. Surely military planners weren’t so naïve as to lack the consideration that helmets had long helped prevent head wounds!

Thick metal helmets were used since ancient times to offer protection to their wearers in combat and are among the earliest forms of armor. Various armies of the Classical Age can easily be identified by their distinctive helmets, which gave way to the great helms of the medieval period. This is when the shift began where helmets became more of a symbol of honor as their protective qualities were overshadowed by the advent of firearms on the battlefield.

As the armies of Europe loaded the guns of August in 1914, the helmets in use had become truly decorative pieces and offered limited protection to those who wore them. Europe was facing the first major conflict after a long period of relative peace with the leaders of the day unprepared for what truly awaited them. While the British army had learned hard lessons from recent colonial conflicts, including the Boer War, France mobilized an army wearing almost anachronistic uniforms that were a holdover from the Second Empire. These bright colored uniforms of the French army would soon give way to more subdued horizon blue and the steel helmet would reemerge as an essential part of field equipment.

Introduction of the Adrian helmet

The story of the soldier wearing a soup bowl was likely confused with the fact that the actual steel skull cap was put into service by Adrian in 1914. It is more likely that instead of bowls being used to provide protection, these uncomfortable metal skullcaps served as mess bowls.

The fact remained that many fatal head wounds were caused not by bullets or blows to the head but rather by small and low-velocity fragments. Any protection at all besides a cloth cap was seen as an improvement with many lives potentially being saved. The priority, therefore, became to provide a helmet quickly.

In 1915 an official protective helmet was introduced and it has been forever tied to its creator, Adrian, who based the design on helmets used by Parisian firefighters. This inspiration actually resulted in a rather complex helmet that consisted of several individual stamped pieces that were riveted and/or welded together. The actual design comprised an oversized skullcap, a two-piece brim with front and rear visor, and a crest over the top that served to cover ventilation holes in the top of the skull piece. The liner varied in design but usually consisted of a leather band with additional fingers to provide padding that was held together by a drawstring to add support for the wear. This rested on a tin corrugated metal sheet that was designed to provide both additional ventilation and suspension while the leather chinstrap was attached to a pair of fixed D-rings on each side of the helmet. The actual thickness of the steel of the M15 was a mere 0.7 millimeter, which was actually even lighter than the contemporary fire helmets, but still provided a great service to the wearer. Five factories began manufacturing these helmets and by the end of 1915 more than three million helmets were produced and distributed to the French army.

The M15 “Adrian” was introduced with the same blue-gray finish as the uniform and beginning in late 1915 the French also introduced a fabric cover in light blue or khaki. While these were issued in large numbers few remain today and these have been heavily faked throughout the years. These were actually ordered abandoned during the summer of 1916. It was believed that the scraps of the cloth, which was quite filthy due to the conditions of the trench warfare, might possibly carry into the head wounds and cause serious medical complications for the soldiers. Later helmets were issued at the factory with a matte gray-blue finish that was darker than the earlier color. Because of the high number of helmets introduced throughout the war, and the fact that paint was not readily available at the front, helmets often appear today in both shades. French Foreign Legionnaires and other colonial troops also used a variety of brown and khaki painted helmets. These were never painted this way in the factory and helmets with this color should have the more typical color underneath.

Additionally, while not common, some troops did take it upon themselves to camouflage their helmets with splashes of brown, green and black paint. There is some photographic evidence of this practice but there are few surviving examples. Helmets with camouflage patterns should therefore be considered extremely rare today.

Because the Adrian helmets were popular with various Allied nations during and even in the ensuing peace that followed these helmets will show up in a variety of other colors with the most common, after the French gray-blue variations, being the brown of the Belgian army. The Russians also used a brownish khaki color while the Italians and Romanians used a gray-green color.

From the introduction of the M15 Adrian, the helmet was issued with a metal insignia that denoted the arm of service. Originally there were a total of nine emblems for the Adrian helmet but this number would rise to twelve by the end of the war. These were stamped-plates and consisted of a number of devices including a flaming bomb for infantry, crossed cannons for artillery, a First-Empire-style helmet and breastplate for engineers, a crescent moon for Zoave regiments, and an anchor for the navy. All of these featured the letters “RF” for the French Second Republic, but it is interesting to note that the original designs lacked these letters, which appear to have been a last-minute addition. However, it is hard to believe that no actual emblems were produced without the “RF” letters, and most encountered should be treated as “fantasy” items.

Emblem variations do exist however and collectors are urged to do the appropriate research but it should be stressed that this emblem type was used until 1937 when a new model was introduced with the same symbols but on a smaller circular base. It is common however to see the circular base emblems show up on Adrian helmets on Internet auctions and at militaria shows but these should not be considered Great War-era helmets.

The use of these badges may seem like another anachronistic element of the French uniform but it did serve an important role nonetheless. In addition to badges, French helmets are occasionally encountered with painted insignia on the front of the helmets. While other nations, most notably Italy, used stencils or even rough painted symbols on their helmets it was extremely rare to find this style of symbol on a true French helmet. Again helmets found in this matter should be viewed with suspicion.

Other less-conventional items are encountered today, although rarely, including the use of stars representing a general. Those stars are affixed to the front of the helmet along with a brass chinstrap.  A more common but still unusual item is the gilt brass plate that would be worn over the front visor of an Adrian helmet. Bearing the inscription “Soldat de la grand guerre 1914-1918,” these were presented to veterans in the years following World War I