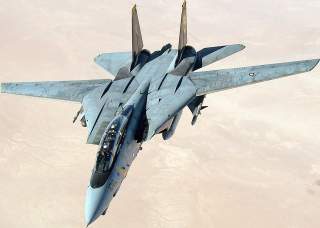 It’s generally accepted that it was two U.S. Navy F-14 crews who scored the first aerial victories in the powerful, twin-engine fighter — when on Aug. 19, 1981, a pair of Tomcats from squadron VF-41 shot down two Libyan Sukhoi Su-22s that had opened fire at them over the Gulf of Sidra.

That’s the conception. As is often the case in the history of aerial warfare, the truth is significantly different. An Iranian F-14 crew actually scored the Tomcat’s first kill.

Iran expressed interest in acquiring the Grumman F-14 Tomcat for the first time in the summer of 1972. Slightly over a year later, the U.S. Congress actually canceled the entire F-14 project — only for Tehran to loan Grumman the money to produce the 80 F-14s it wanted.

A startled Congress decided to continue financing the project for the U.S. Navy. Yes, we have Iran to thank for Top Gun.

Of course, a sale of such a sensitive aircraft and the associated AIM-54 Phoenix long-range, radar-homing air-to-air missile — to a country such as Iran drew fierce opposition from many members of Congress.

Actually, Soviet MiG-25s flew only a handful of such missions over Iran throughout the 1970s. At the same time, the Imperial Iranian Air Force and the U.S. Air Force ran a joint operation with the U.S. National Security Agency that sent at least one flight into Soviet airspace every week, usually flown by Iranian RF-4s with mixed U.S. and Iranian crews. That operation lasted from 1971 to 1978.

In February 1979, an Islamic Revolution swept Shah Mohammed Reza Pahlavi from power. The new regime in Tehran instantly cancelled orders for additional U.S. arms, including a second batch of 75 up-engined F-14s, and cut off all military links to the USA.

Thousands of U.S. advisers and their families were forced to leave the country — often at a gunpoint. The situation developed into a major international crisis in November 1979, when a group of Iranian students occupied the U.S. embassy in Tehran, demanding the United States hand over the shah for prosecution.

Thus began the so-called Iran hostage crisis, which was to last for 444 days and completely wreck U.S.-Iranian relations for decades to come.

Meanwhile, the controversy surrounding Iranian F-14s continued to grow. Reports began to circulate that entire Tomcat-fleet of what became the Islamic Republic of Iran Air Force was inoperable. U.S. advisors reportedly sabotaged either their radars and fire-control systems or at least most of their weaponry before leaving.

Furthermore, nearly all of the Iranian pilots and radar intercept officers who had trained in the USA were either arrested and jailed or forced into early retirement.

The fleet of 77 F-14s — two were lost in training accidents in 1978, while one example was never delivered to Iran — was thus left to languish at bases outside Shiraz and Esfahan.

However, when Iraqi armed forces began attacking Iranian border posts in August 1980, Tehran ordered the IRIAF back into the skies. Correspondingly, the remaining personnel of four squadrons equipped with F-14s and based at Tactical Fighter Base 7 in Shiraz and TFB.8 in Esfahan scrambled to return their aircraft to operational condition.

Contrary to legends circulating in the West, there was no lack of spares. When ordering its Tomcats, Iran also purchased immense amounts of extra parts, together with all the necessary support infrastructure.

And while many Tomcat crews had been forced to leave by that time, there was no lack of qualified pilots. Nevertheless, squadrons at TFB.7 did lack qualified backseaters — and there was shortage of technicians qualified to maintain the F-14’s complex avionics and engines.

After putting most of the available crews through refresher training, by early September 1980 the IRIAF proved capable of launching up to four F-14s on regular patrols along the Iraqi border.

Their appearance was reported to the IRIAF — and two F-14s from TFB.7 vectored to intercept.

A few minutes later, the lead Tomcat — crewed by Maj. Kamal Jamshidi, with 2nd Lt. Pasha-Pour as radar-intercept officer — visually acquired one of the Mi-25s, confirmed it was inside Iranian airspace and dove to attack.

According to most of the contemporary tactical manuals, a precious interceptor such as an F-14 wasn’t supposed to engage a heavily-armed helicopter in close combat. Instead, it should shoot at the copter at range.

But the revolution had disrupted integration of the AIM-9 Sidewinder short-range air-to-air missile and the medium-range AIM-7 Sparrow on Iranian F-14s. For the first six months after their re-activation, the IRIAF’s Tomcats were armed solely with ultra-long-range AIM-54 Phoenixes and their internal 20-millimeter M61 Vulcan cannons.

And because only 284 of the 714 AIM-54As Tehran had ordered were ever delivered, the Iranians were loathe to expend any of them unnecessarily. Therefore, Jamshidi engaged with his cannon. He placed the gunsight pipper over the rearmost Mi-25 and opened fire.

Several of about 400 rounds he fired found their mark, badly damaging the Iraqi helicopter. Its pilot, 1st Lt. Lufty, managed an emergency landing on the Iraqi side of the border before succumbing to his injuries.