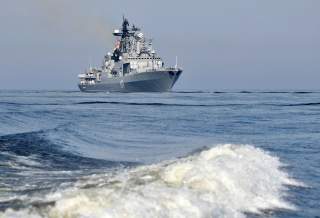 Key point: This minor dispute could end up badly damaging relations between the two nuclear powers.

Russian border patrol has detained 161 North Korean sailors for suspected poaching activity in the Sea of Japan, triggering a diplomatic conflict that is raising concerns in Moscow about the future of the Russian-North Korean security relationship.

Far from an isolated case, this incident is the culmination of a long-running series of fishing tensions between North Korea and its Russian neighbor. According to Aleksei Maslov, director of the Center for Strategic Studies of China and one of Russia’s foremost East Asia experts, “unfortunately, North Korean piracy and illegal fishing have always existed in one form or another within our territorial waters.” Maslov asserts that Russian authorities have turned a blind eye to similar North Korean behavior for years, but that the armed, 161-strong poaching expedition was the straw that broke the camel’s back: “I think [our] patience snapped, our border guards began enforcing the law, and DPRK realized that the warnings are over.”

Russia’s Foreign Ministry announced that it plans to summon Chin Jeong Hyup, charge d'affaires of the DPRK’s Russian Embassy, regarding the incident.

Moscow, as Maslov puts it, “firmly maintains that there are political relations with North Korea and then there’s piracy… we have our own interests vis-à-vis North Korea, and there is no reason to spoil them over pirates.” Nevertheless, it strains credulity to believe that the North Korean government had no knowledge of what 161 of its armed citizens were doing in foreign waters.

Maslov would like to see the North Korean sailors extradited to face trial in the DPRK, but Russia’s more hawkish political commentators are demanding much tougher action on the part of Moscow. “Poachers need to be drowned if they attempt to shoot at our border guards, political scientist Evgeny Satanovskii told Russian media earlier today. He added, “It is utterly irrelevant which country they are from.”

Meanwhile, prominent members of Russia’s political establishment worry that the incident will tarnish Russian-North Korean relations if not handled delicately. “I am not justifying them in any case, but I wouldn’t want this incident to reflect on our relationship [with DPRK]. The irritation between us and North Korea will benefit many, and these “many” are by no means friends of Russia,” said Senator Andrei Klimov to Russian state news outlet NSN, adding that he believes the poachers “would be shot if they fell into Pyongyang’s hands."

It remains to be seen if Moscow plans on pursuing any punitive measures against Pyongyang regarding not only this specific poaching skirmish, but in response to frequent, legally-questionable North Korean fishing incursions into Russia’s far eastern waters. What is clear, however, is that the incident has become a test for the frail, but critical Russian-North Korean security relationship.

Mark Episkopos is a frequent contributor to The National Interest and serves as a research assistant at the Center for the National Interest. Mark is also a Ph.D. student in History at American University. This first appeared in September 2019.