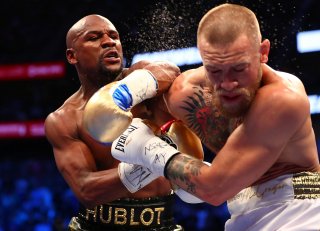 In "Rocky Balboa," the mostly-forgotten "Rocky" sequel from 2006, the plot is set in motion by ESPN creating a computer simulation that pits boxers from different eras against one another. This spurs Sylvester Stallone's long-retired, 50-something Rocky to get back in the ring for real and face off with the much younger modern-day champion.

Floyd Mayweather is only 43 years old, and since he has retired and unretired multiple times, whether he should be considered an active professional boxer is something of a complicated question. But the many-time boxing champion has become part of art imitating life, with the announcement that he has reached a deal to create a "Virtual Mayweather."

Mayweather is teaming with FaceBank Group and Fubo TV in order to "create and manage the world-renowned retired professional boxing champion and promoter’s digital likeness, 'Virtual Mayweather.'" The deal will include the use of Mayweather's virtual likeness in a wide variety of programming, including in scenarios involving futuristic technologies.

One project being developed as part of the deal are "virtual boxing matchups pitting Mayweather’s digital likeness against other boxing legends and icons," with possible matches pitting Mayweather against Sugar Ray Leonard and even Bruce Lee. These fights will be available exclusively on the TV service Fubo TV. No release date has been announced for the virtual fights.

The company plans to announce similar agreements in the coming weeks with other sports figures, whose cooperation will presumably be necessary for such simulations to be presented. It's unknown if the company has reached agreements with Leonard or with the estates of Muhammad Ali or Bruce Lee.

How will these simulations work, and who will win? The simulations, the announcement says, will resemble short films, and will "feature top-secret results based on a modeling computer that will make incremental relationships between actual performance, the velocity of punches, speed of reaction, strategy and stamina."

The Mayweather announcement follows the recent merger between FaceBank - a company known for virtual entertainment technology- and Fubo TV, an over-the-top TV service. The combined company is using the Fubo TV name.

FaceBank is the company that was responsible for the holograms of the likes of Tupac Shakur and Michael Jackson that have appeared at high-profile public events, and also owns the hologram rights to Elvis Presley and other deceased celebrities. The Mayweather release, though, doesn't make any mention of hologram technology.

Fubo TV is known for television commercials that feature its "Fubo Chavez" character, who talks up the service's sports offerings, especially international soccer.